The Smithsonian Astrophysical Observatory (SAO) is part of the Center for Astrophysics | Harvard & Smithsonian. SAO was founded in 1890 under Smithsonian Secretary Samuel Pierpont Langley as a research bureau of the Smithsonian Institution. It began its tenure alongside other Smithsonian units on the Mall in Washington, D.C. with an early focus on solar research.

The Smithsonian Astrophysical Observatory (SAO) was established in 1890 as research unit of the Smithsonian Institution concentrating on studies of solar radiance. Sixty-five years later, SAO assumed responsibility for establishing an optical network for tracking the first artificial satellites. From this pioneering effort, the size and scope of SAO grew with the international space program to include major research in virtually all branches of astrophysics, as well as in areas of earth and planetary sciences.

Since 1955, when its headquarters moved to Cambridge, Massachusetts, SAO has pursued such research in close collaboration with the Harvard College Observatory (HCO) and Harvard University Department of Astronomy. On July 1, 1973, the Smithsonian Institution and Harvard University formalized their collaboration now known as the Center for Astrophysics | Harvard & Smithsonian (CfA) to coordinate the related research activities of the two observatories under a single director. Today the observatories retain their separate identities, each responsible to its parent organization; however, the joint venture draws on the coordinated strengths of the two organizations and the combined staffs in six research divisions: Atomic and Molecular Physics; High Energy Astrophysics; Optical and Infrared Astronomy; Radio and Geoastronomy; Solar, Stellar, and Planetary Sciences; and Theoretical Astrophysics. In addition, the CfA has a Science Education Department.

Today SAO is part of what is arguably the largest and most diverse astrophysical institution in the world, where the combined staff now numbering more than 300 scientists carries out a broad program of research in astronomy, astrophysics, and earth and space sciences. Key areas of research include exoplanets, the sun and solar weather, asteroids and comets, and "The Extreme Universe" that includes the study of black holes, pulsars, supernovae, white dwarfs, neutron stars and magnetars. Observational facilities include the multipurpose Fred Lawrence Whipple Observatory (FLWO) on Mt. Hopkins in Arizona and the Submillimeter Array Telescope (SMA) on Mauna Kea, Hawaii, the latter a collaboration with the Academia Sinica in Taiwan.  SAO instrumentation is also operating in space in The Chandra X-ray Observatory (SAO, on behalf of NASA, serves as the site of both the Chandra X-ray Observatory Science Center (CXC) and the Chandra Operations and Control Center) and many other current and future missions. 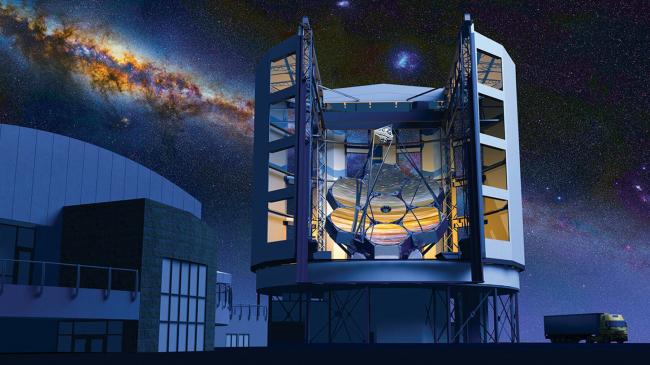 This artistic depiction shows what the Giant Magellan Telescope will look like when construction is completed. The finished GMT will have seven mirrors working together to focus light from distant stars and galaxies.