The Center for Astrophysics | Harvard & Smithsonian advances humanity’s knowledge of the Universe by uncovering the nature of distant cosmic phenomena. But many of our greatest discoveries start with the simple act of observing. Here’s what to look for in our current night sky. (Courtesy NASA/JPL-Caltech)

What's Up for February? The brightest planets converge, the constellation Auriga, and two star clusters you might want to get Sirius about.

What to look for in February: Planets gather, the charioteer, and "Sirius" star clusters! Venus and Jupiter cozy up, the constellation Auriga makes a worthy target, and two star clusters you can find using Sirius and a pair of binoculars. 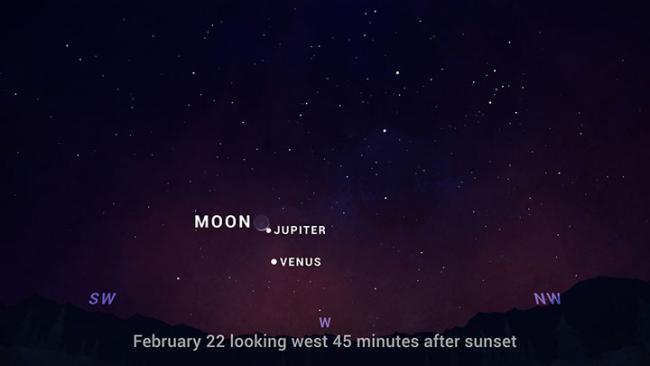 Sky chart showing the crescent Moon near Jupiter on February 22, with Venus below them.

All month long, you'll notice the two brightest planets in the sky, Jupiter and Venus, appear closer together each evening. Find them in the west in the hour or so after sundown. On February 22nd, the crescent Moon sits just a degree apart from Jupiter, with Venus hanging beneath them. The two planets then continue to get closer in the sky over the following week, culminating in a close conjunction on March 1st.

Another nice pairing takes place on February 27th, when the Moon and Mars will appear less than a degree apart. You'll find them high in the southwest after sunset.

The constellation Auriga makes for a worthy target to pick out in the February sky. Auriga represents an ancient chariot driver, and it's often depicted as an entire person, but given the outline, you might prefer to think of it as one of a chariot's wheels.

The brightest star in Auriga is Capella. Now, in Latin, Capella is a word for a female goat, and in addition to Capella, there are three little stars nearby, known as "the kids" – as in the name for baby goats, which is pretty fun.

Opposite Capella toward the south is the bright star Elnath. Technically it's part of Taurus next door, but it helps define the roughly circular shape of Auriga. 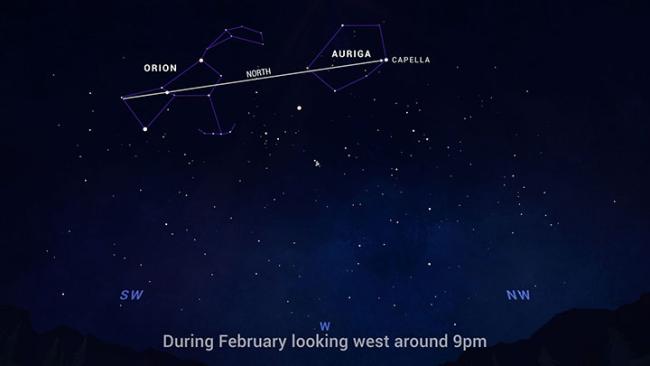 This sky chart shows how to locate Capella, in order to identify the constellation Auriga. Just look northward twice the height of Orion to find Capella.

Auriga appears high in the western sky on February evenings, and it's relatively easy to find, thanks to Capella and Elnath. From Orion, look northward twice the height of Orion, to find Capella. Then spot Elnath on Auriga's opposite side and from there it's pretty easy to identify the other stars that round out the shape of the charioteer constellation.

All month long, observers with access to a good pair of binoculars or a small telescope can hunt for two easy star clusters using the brightest star in the sky as a guidepost. They're two open star clusters, M41 and M47. They're called "open" because their stars are close together in space, but in sort of a diffuse structure.

To find them, start with brilliant Sirius, which is easy to pick out toward the south in the winter night sky. M41 lies just 4 degrees south of Sirius, and should be visible in the same field of view in binoculars, where it appears as sort of a faint patch of light. It's about as wide on the sky as the full moon, though in actual extent it's about 25 light years across and is located about 2,300 light years away from us.

To find M47, you can also start at Sirius and work your way over toward the east about 12 degrees, and then a couple of degrees to the south north. It's about the same size on the sky as M41, but just a little brighter. M47 lies about 1,600 light years away and occupies a volume of space about 12 light years across.

Our own Sun is thought to have formed as part of a cluster like these. So finding them in the February sky can be a pretty neat way to connect with our own cosmic origins.

Here are the phases of the Moon for February: 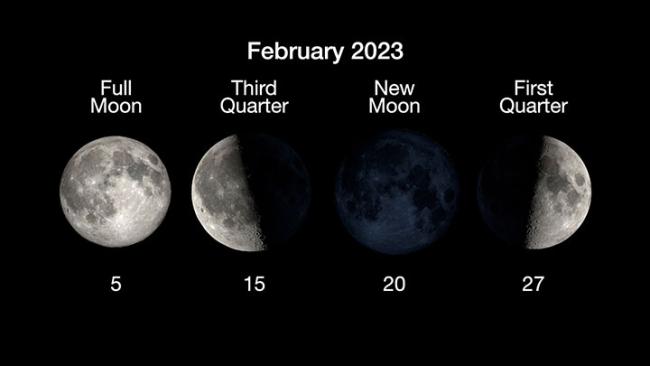 The phases of the Moon for February 2023.