The Sun’s surface is incandescently hot, but its outer atmosphere — the corona — is far hotter, for reasons astronomers don’t fully understand. NASA’s Interface Region Imaging Spectrograph (IRIS) is an orbiting observatory designed to study the mysterious transitional part of the Sun’s lower atmosphere, where the heating of the material flowing into the corona takes place. Understanding the heating process may help predict solar storms as well. Scientists and engineers from the Center for Astrophysics | Harvard & Smithsonian contributed to the telescope for IRIS. In addition, CfA researchers participate in telescope operations, and provide scientific support and analysis for the observatory’s work.

The Sun may be the nearest star, but there’s still a lot we don’t understand about it. One of the larger mysteries is the solar corona: the tenuous outermost atmosphere that’s only visible to the unaided eye during a total solar eclipse. This shroud of gas, which extends much farther than the Sun’s surface, can reach millions or even tens of millions of degrees, in contrast to the surface temperature of 5500º C (9900º F). Scientists aren’t sure exactly why the corona’s temperature is so high.

IRIS was built to study the “interface region”, which lies between the inner atmosphere and the corona, to help understand why the corona is so hot. IRIS was launched in 2013 as part of NASA’s Small Explorer Mission program of relatively small, specialized, and less expensive spacecraft. The observatory itself is roughly 2.1 meters (7 feet) long, with solar panels roughly 3.7 meters (12 feet) across, meaning the entire spacecraft could fit into a large living room. IRIS carries a single 20-centimeter (8 inch) ultraviolet (UV) telescope, designed by engineers at the CfA, along with instruments designed to analyze the spectrum of light. That small size means it only can image about one percent of the Sun’s surface at one time, but it can distinguish small features within the atmosphere. 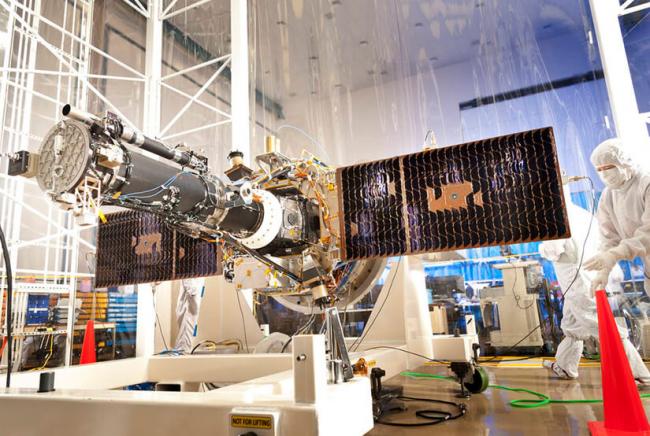 In this photograph, engineers and scientists prepare NASA's Interface Region Imaging Spectrograph (IRIS) before its launch.

Researchers at the CfA participate in planning for IRIS observations, and perform the analysis of data to extract the scientific information. The end result of that process is a sophisticated three-dimensional supercomputer model of the interface region, providing important knowledge of how this mysterious part of the Sun’s atmosphere works.

This image from the IRIS spacecraft shows solar prominences — huge swirls of gas shown in red here. IRIS provides fine details of the region of the Sun's atmosphere where material is heated to millions of degrees.