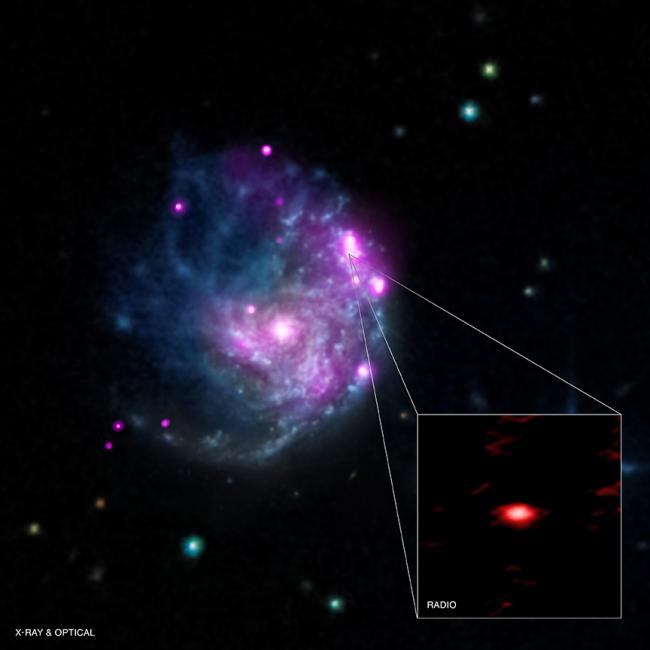 An intriguing object has been found in one of the spiral arms of the galaxy NGC 2276. This source, called NGC 2276-3c, appears to be an intermediate-mass black hole. According to X-ray and radio data, NGC 2276-3c contains about 50,000 times the mass of the Sun.

A newly discovered cosmic object may help provide answers to some long-standing questions about how black holes evolve and influence their surroundings, according to a new study using NASA's Chandra X-ray Observatory.

"In paleontology, the discovery of certain fossils can help scientists fill in the evolutionary gaps between different dinosaurs," said Mar Mezcua of the Harvard-Smithsonian Center for Astrophysics, who led the study. "We do the same thing in astronomy, but we often have to 'dig' up our discoveries in galaxies that are millions of light-years away."

The intriguing object, called NGC2276-3c, is located in an arm of the spiral galaxy NGC 2276, which is about 100 million light-years from Earth. NGC2276-3c appears to be what astronomers call an "intermediate-mass black hole" (IMBH).

For many years, scientists have found conclusive evidence for smaller black holes that contain about five to thirty times the mass of the Sun. There is also a lot of information about so-called supermassive holes that reside at the center of galaxies and weigh millions or even billions times the Sun's mass.

As their name suggests, IMBHs represent a class of black holes that fall in between these two well-established groups, with masses in the range of a few hundred to a few hundred thousand solar masses. One reason that IMBHs are important is that they could be the seeds from which supermassive black holes formed in the early universe. "Astronomers have been looking very hard for these medium-sized black holes," said co-author Tim Roberts of the University of Durham in the UK. "There have been hints that they exist, but the IMBHs have been acting like a long-lost relative that isn’t interested in being found."

To learn about NGC2276-3c, the researchers observed it at almost the same time in X-rays with Chandra and in radio waves with the European Very Long Baseline Interferometry (VLBI) Network. The X-ray and radio data, along with an observed relation between radio and X-ray luminosities for sources powered by black holes, were used to estimate the black hole's mass. A mass of about 50,000 times that of the Sun was obtained, placing it in the range of IMBHs.

"We found that NGC2276-3c has traits similar to both stellar-mass black holes and supermassive black holes," said co-author Andrei Lobanov of the Max Planck Institute for Radio Astronomy in Bonn, Germany. "In other words, this object helps tie the whole black hole family together."

In addition to its mass, another remarkable property of NGC2276-3c is that it has produced a powerful radio jet that extends up to 2,000 light-years. The region along the jet that extends for about 1,000 light-years from NGC2276-3c seems to be missing young stars. This provides evidence that the IMBH may have had a strong influence on its environment, as the jet could have cleared out a cavity in the gas and suppressed the formation of new stars. Further studies of the NGC2276-3c jet could provide insight into the potentially large effects that supermassive black hole seeds in the early universe have had on their surroundings.

The location of this IMBH in a spiral arm of NGC 2276 raises other questions. Was it formed within the galaxy, or did it come from the center of a dwarf galaxy that collided and merged with NGC 2276 in the past?

This IMBH is one of eight ultraluminous X-ray sources (ULXs) in NGC 2276 studied by Anna Wolter of the National Institute for Astrophysics (INAF) in Milan, Italy, and her colleagues. Hundreds of ULXs have been detected in the last 30 years; however, the nature of these sources is still a matter of debate, with some thought to contain IMBHs. Chandra observations show that one apparent ULX observed by ESA's XMM-Newton is actually five separate ULXs, including NGC 2276-3c. Wolter's study concluded that about five to fifteen solar masses worth of stars are forming each year in NGC 2276. This high rate of star formation may have been triggered by a collision with a dwarf galaxy, supporting the merger idea for the IMBH's origin.

High Energy Astrophysics, Optical and Infrared Astronomy, Solar, Stellar, and Planetary Sciences, Science Education Department
The Sensing the Dynamic Universe (SDU) project creates sonified videos exploring the multitude of celestial variables such as stars, supernovae, quasars, gamma ray bursts and more. We sonify lightcurves and spectra, making the astrophysics of variables and transients accessible to the general public, with particular attention to accessibility for those with visual and/or neurological differences.
3