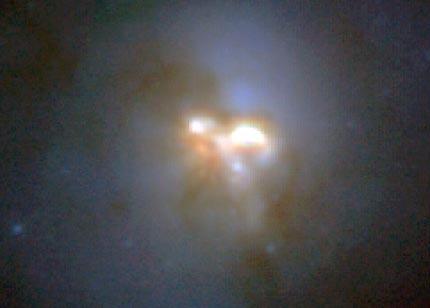 A Hubble near infrared image of the ultraluminous merging galaxy Arp220. The galaxy is in the class of buried galactic nuclei whose inner, nuclear regions are extremely obscured by dust and completely opaque to optical light. Astronomers used the ALMA facility to study the structure of the hidden nuclear region.

The most luminous galaxies in the universe are more than a thousand times brighter than our Milky Way, but they are relatively dim in the optical. Most of their radiation is emitted at infrared wavelengths by dust that has been heated by massive starburst activity and / or the accretion of material onto a supermassive black hole galactic nucleus (an AGN, active galactic nucleus). Moreover, most of the tremendous luminosity typically arises in their central circumnuclear regions, only hundreds of light-years in size. Here the dust is particularly dense and even X-ray emission is typically absorbed before it can escape and be detected. All this obscuring material makes it very difficult for astronomers trying to answer key questions about these galaxies including details of the mechanisms that generate the energy and the conditions that triggered their ultra-bright behavior.

Two luminous galaxies, Arp 220 and NGC 4418, have nuclear regions that are among the most heavily obscured known and are in a class called buried galactic nuclei. Radio observations had found that Arp 220 has a double nucleus, suggesting that it was in the midst of a merger of two galaxies; merging is one of the principle ways thought to produce ultraluminous systems. The other galaxy, NGC4418, does not show evidence of two nuclei but may be in a later stage of evolution, after the two have coalesced. The most intense phase of starburst and AGN activity is only thought to last 100 million years, but recurrent activity may occur and these two galaxies could be representative of the two situations. Astronomers, besides trying to understand the origin of ultraluminous galaxies, also want to study the extreme physical processes in the nuclei, like the inflow of accreting material and the ejection of jets from the AGN.

CfA astronomer David Wilner and a team of colleagues used the ALMA facility to probe the nuclear regions of Arp 220 and NGC 4418 at millimeter wavelengths with unprecedented sensitivity and spatial resolution. They resolved the nuclear cores of the galaxies and found each of them to be between about 60-400 light-years in size with complex, slightly elongated shapes that suggest rotation of the material is responsible for the morphology. They were also able to determine the shape of a bipolar outflow from one core, the inclination of their circumnuclear disks (about sixty degrees in all cases), and to derive an expression relating the spectral shape of the millimeter continuum to the total nuclear obscuration, something that will make it much easier to identify other buried galactic nuclei. The result emphasizes the considerable utility of the submillimeter and millimeter-wave continuum emission from obscured nuclei in modeling the nature and evolution of luminous galaxies. In a companion paper, the team presents the spectral results from their observations.