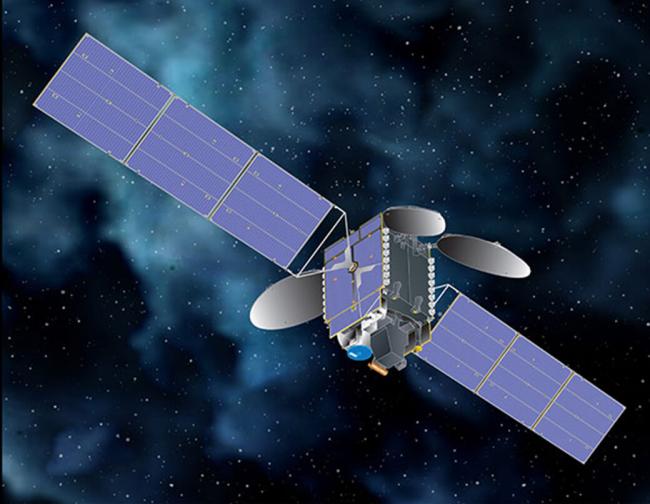 Artist's impression of the satellite that will carry the TEMPO instruments for monitoring air quality and pollution in North America.

The Satellite and the Science

TEMPO is part of NASA’s Venture Class Missions program, a set of low-cost space probes, as well as the Earth System Science Pathfinder (ESSP) program of Earth observatories. The scientific instruments for TEMPO will be carried aboard a commercial communications satellite in 2022, which will have a geostationary orbit, staying above precisely the same spot on Earth’s equator. That will allow TEMPO to observe variations in air quality across the whole of North America on an hourly basis.

An illustration of TEMPO scanning the continental United States.

Air pollution comes from a variety of sources, including industry, the burning of fossil fuels for power, agricultural practices, and international transportation. These sources fluctuate in time and the pollutants they produce can be carried long distances by air currents. TEMPO’s instrument is a spectrometer designed to measure ultraviolet and visible light, collecting information about common pollutants such as nitrogen dioxide, ozone, and aerosol particles. The mission will be able to look at air quality with incredibly high resolution capable of distinguishing details in cities.

TEMPO will be the first space-based mission designed to provide hourly reports on air pollution, which in turn will be essential for researchers and public officials tracking air quality. The CfA | Harvard & Smithsonian is taking the scientific lead on the project, which includes collaborators from NASA, the Environmental Protection Agency, and other research institutions in the US, Canada, Mexico, Cuba, Korea, Europe, and Canada. TEMPO will be the North American component of a constellation of Earth-observation satellites monitoring air pollution.