All the planets and quite a few other worlds in the Solar System have an atmosphere of some sort. Whether thick and blanketing like Venus or Jupiter, life-supporting like Earth’s, or wispy like Mercury’s, atmospheres are part of the complex processes that make each world unique. As Earth shows, there’s a strong link between life and the atmosphere, a lesson researchers use when looking for life elsewhere in the galaxy. Using modern telescopes, astronomers even have a few observations of atmospheres on planets orbiting other stars.

Center for Astrophysics | Harvard & Smithsonian scientists and engineers study the atmospheres of planets in many ways: 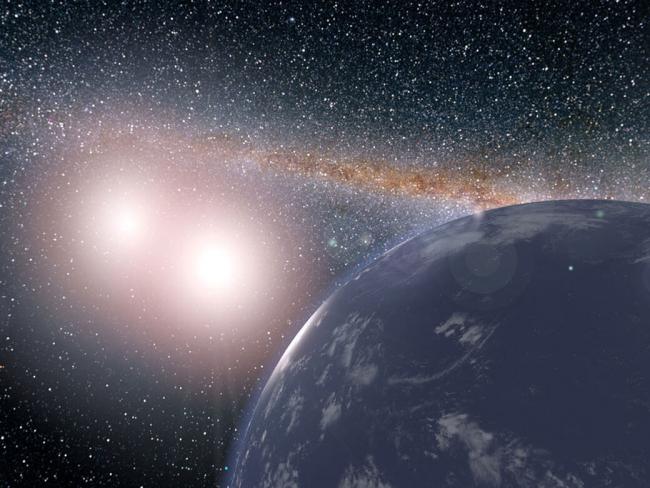 This artistic rendition of the exoplanet Kepler-35b depicts it as a "water world": a possibly habitable planet covered in water. CfA researchers are collaborating on advanced technology that will analyze the atmospheres of such planets for the chemical signatures of life.

Earth’s atmosphere is what enables life as we know it to exist, but it was also shaped by life. The particular chemical balance of our air was partly created by organisms over life’s four-billion-year history. Atmospheres on any world reflect the history and evolution of that particular place. Mercury’s thin, wispy atmosphere is a product of its closeness to the Sun, while Saturn’s moon Titan has a thick cold atmosphere that is the result of its mysterious history.

Researchers studying planetary atmospheres look for commonalities as well as unique details between worlds. On Earth, the presence of water has a profound effects on every aspect of the atmosphere, while Mars’ much drier and colder atmosphere produces global dust storms. Planetary scientists have learned Mars was once wetter than it is today, and studying the Martian atmosphere is essential to understanding what changed.

Meanwhile, scientists are identifying some chemical traces in the atmospheres of exoplanets. When those planets cross in front of their host star, a tiny amount of the star’s light passes through the atmosphere. Some of that light can be absorbed by atoms or molecules in the exoplanet air, leaving a distinct spectral signature. That doesn’t tell us the entire chemical composition of the planet’s atmosphere, but it can reveal water or other important molecules. The next generation of telescopes include telescopes specifically designed to look for oxygen, water, and other potential signs of life in exoplanet atmospheres.

Additionally, observers have seen signs of stellar weather affecting exoplanets. Radiation and particles from stars can puff up exoplanet atmospheres and in extreme cases strip the air away entirely. Many known exoplanets orbit active stars, which produce powerful flares. It’s possible that the interactions between stellar weather and planetary atmospheres could prevent life-supporting conditions on worlds in such star systems, even if those exoplanets might seem otherwise habitable.