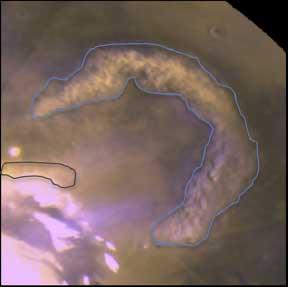 An image of a Martian textured dust storm taken with the Mars Global Surveyor (MGS) mission. The colored contours indicate the confidence level of the identifications. A new analysis of textured dust storms examines data over eight years of MGS observations and finds that such storms account for about half of all the dust in the Martian atmosphere.

In the 1870's astronomers first noted the presence of yellow clouds on the surface of Mars and suggested they were caused by windblown dust. Today, dust storms on Mars are well known and those that display visible structures are called "textured dust storms." Textured dust storms actively lift dust into the atmosphere, and can result from a range of meteorological effects including strong winds. Besides obscuring views of the Martian surface, dust in these storms affects atmospheric heating, and accumulation of dust on the surface can alter the surface albedo (reflectivity). These dust storms, despite being studied for more than a century, remain rather mysterious. It is not understood, for example, how textured storms are distributed over the surface of the planet, when their frequency peaks, or how much dust is actually swept up.

CfA astronomer Huiqun Wang and her three collaborators used data from the Mars Global Surveyor (MGS) mission and its suite of instruments to study textured dust storms. MGS was launched in 1999 and has been observing Mars almost continuously since then; subsequent missions like the Mars Reconnaissance Orbiter (launched in 2005) added to the database. The scientists examined a complete record of MGS daily global maps to study the climatology of dust storms that exhibit non-smooth textures, and relate these observations to the surface dust distribution and atmospheric effects.

The astronomers found that textured dust storms are seasonally clustered: they occur mostly at the equinoxes (the "spring" and "fall" seasons of Mars) and not the solstices (the "summer" and "winter" seasons). They also occur most frequently in the north-polar region above mid-latitudes. They are able to quantify the relative importance of textured dust storms to dust in the atmosphere, and find that they can account for about half, the rest coming from local "dust devils" or other small-scale disturbances. Not least, they report that the dust in textured dust storms is mixed globally on a timescale of weeks. The new research, which analyzed eight years of spacecraft observations, uses the most complete set of data to date to obtain the most recent understanding of Martian dust storms.