While astronomers have discovered thousands of other worlds orbiting distant stars, our best knowledge about planets, moons, and life comes from one place. The Solar System provides the only known example of a habitable planet, the only star we can observe close-up, and the only worlds we can visit with space probes. Solar System research is essential for understanding the origin and evolution of planets, along with the conditions necessary for life.

Center for Astrophysics | Harvard & Smithsonian scientists study the Solar System in many ways:

The Mysterious Worlds We Know Best

The heart of the Solar System is the Sun, a yellow star of moderate mass somewhere in the middle of its life cycle. That star is what drives most of the physical processes in the system, from heating Earth’s atmosphere to allow life, to gently pushing asteroids around and giving comets their tails. The rest of the Solar System is its eight major planets, five dwarf planets, hundreds of moons, and a large number of comets, asteroids, and other small bodies of rock and ice.

The extent of the Solar System is defined by the solar wind — particles driven by the Sun’s magnetic field — and gravitational influence. The heliopause is the boundary created when solar wind particles collide with interstellar gas as the Solar System moves through the galaxy. The gravitational edge is much farther and is defined by the Oort Cloud, a halo of icy debris left over from the formation of the Solar System. The Oort Cloud is the origin of many comets, and reaches nearly halfway to the nearest star.

As we’ve learned through centuries of study, the various planets, moons, and other objects in the Solar System are the products both of their common origin and of their unique history. Missions to Jupiter and Saturn have revealed that some moons might have habitable oceans beneath the ice. Comets and asteroids are the remaining planetesimals from the nebula that made the Solar System, which provide us with a look at the chemistry and physical processes that produced the planets.

Researchers use all that information to understand where we came from, and how the Solar System fits in with the thousands of known exoplanet systems. We can study the worlds of our Solar System in more detail than these alien planets, but no other star system so far resembles ours. The contrast between these systems and ours helps us understand the general rules governing planet formation and evolution. 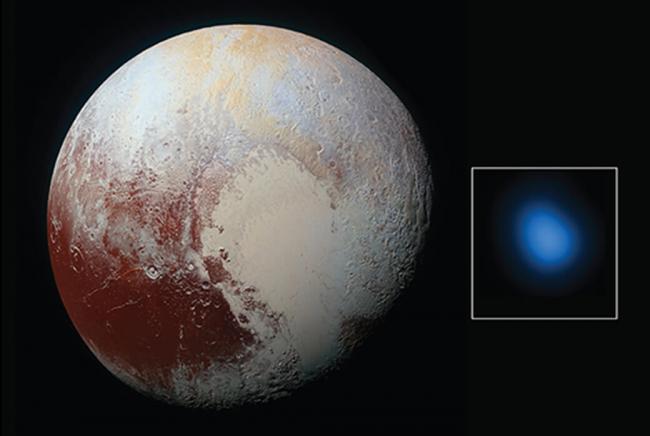 Pluto's atmosphere is barely visible as seen in the optical light image captured by NASA's New Horizons spacecraft. However, in the inset X-ray picture from NASA's Chandra X-ray Observatory, the atmosphere shines out, revealing details about the environment of the outer Solar System.