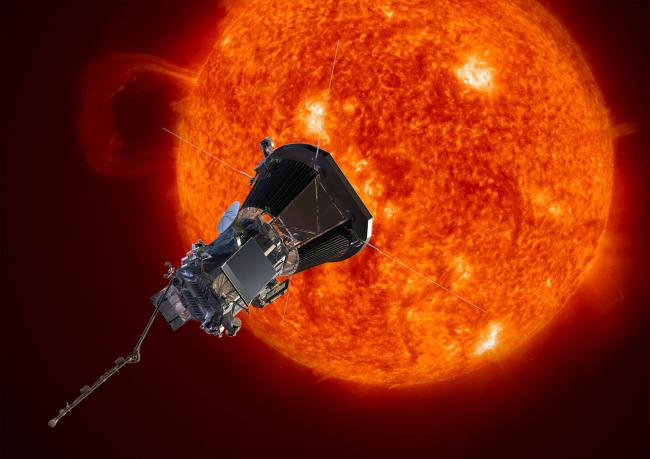 This artistic depiction of NASA's Parker Solar Probe shows the spacecraft on its approach to the Sun. The probe passes through the outermost layers of the solar atmosphere, collecting particles and taking measurements to understand solar weather.

The Sun’s corona — its outermost atmosphere — is hundreds of times hotter than the surface, reaching millions of degrees. In other words, something must be heating material between the surface and the outermost layers. As part of that process, some corona particles gain enough speed to escape into the Solar System as the solar wind. Solar scientists have studied these mysteries for more than 50 years without coming up with definitive answers.

But the extreme conditions of the environment near the Sun meant that engineers couldn’t build spacecraft capable of studying the corona up close until recently. NASA’s Parker Solar Probe takes advantage of advances in technology to protect sensitive scientific instruments from the high temperature and radiation, flying directly through the corona to study its particles and electromagnetic fields up close. The probe is the first NASA project named for a living scientist: solar physicist Eugene Parker, who coined the term “solar wind”.

The Parker Solar Probe was launched on August 12, 2018 as part of NASA’s solar observation program. The spacecraft has a heat shield and cooling system designed to keep instruments from overheating in the extremely hot corona. One of those instruments, the Solar Probe Cup (SPC), extends past the heat shield to collect electrically-charged particles from the plasma in the corona — electrons, protons, and the bare helium nuclei known as alpha particles — that make up the largest fraction of the solar wind.

SPC is one of three sensors in the SWEAP instrument suite, along with the two Solar Probe Analyzers (SPAN). SPC is a device known as a “Faraday cup”, which sorts ions by energy using a set of transparent grids and collecting plates. The SPAN-A and SPAN-B detectors perform a similar sorting for particles coming from other directions, with SPAN-B studying only electrons in the plasma. By counting these particles and measuring their temperature and density, SWEAP can determine how the solar wind forms.

The Parker Solar Probe also carries: the FIELDS detector, which uses five antennas to measure the electric and magnetic fields in the solar corona; the Wide-Field Imager for Parker Solar Probe (WISPR), which takes images of the corona to reconstruct its three-dimensional structure; and the Integrated Science Investigation of the Sun (ISʘIS, where ʘ is the astronomical symbol for the Sun), made up of particle detectors designed to study very high energy particles.

The probe was built and extensively tested to withstand the intense temperatures and radiation in the corona. With this careful preparation, the Parker Solar Probe is designed to last for seven years and make 24 separate passes through the corona, flying by Venus to leverage its gravity and get closer to the Sun as the mission progresses.