The Sun is a star. While we take that fact for granted today, the discovery that stars are objects like our Sun was a profound one. The kinship between the Sun and stars means we can learn about distant stars by studying the Sun. The reverse is also true: we are only witness to the Sun as it is now, but other stars can show us how it was during earlier stages of the Sun’s life, and how the Sun will be billions of years later.

Center for Astrophysics | Harvard & Smithsonian astronomers look for connections between the Sun and the stars in many ways: 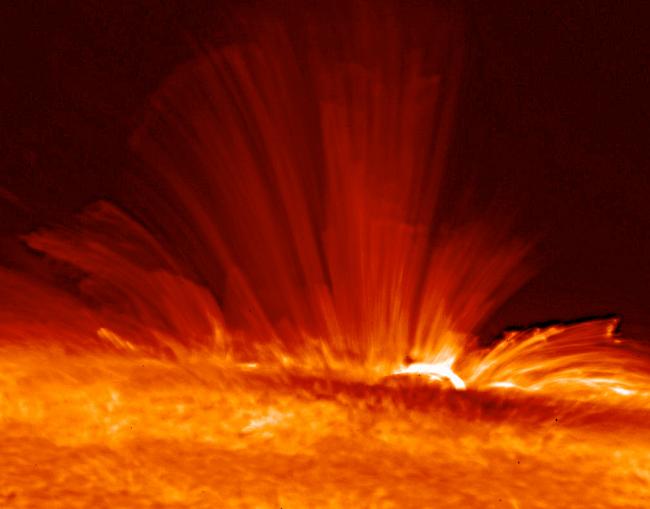 Hot gas driven by the Sun's magnetic field shoots up from the surface in this image from the Hinode spacecraft. Researchers use what they've learned about the Sun to study similar phenomena on other stars.

The Sun is the Nearest Star, Other Stars are Distant Suns

The Sun turns out to be a pretty ordinary star. It’s a “main sequence” star, meaning it fuses hydrogen into helium in its core. Mass-wise, it’s above average, but it’s similar to many stars we see in the Milky Way and beyond. As a result, the Sun helps us understand a lot of other stars in the cosmos.

That’s ideal because the Sun is so close. Earth- and space-based telescopes monitor the Sun literally all the time. Solar researchers study day-to-day fluctuations in the Sun’s atmosphere and magnetic field, looking for patterns that reveal what’s going on beneath the surface. What we learn from the Sun can be applied to similar stars around the galaxy.

By extension, researchers look for Sun-like stars to compare with ours. Even though these stars appear too small for astronomers to distinguish individual features on their surfaces, fluctuations in their light reveal magnetic cycles like those we see on the Sun. In addition, researchers identify Sun-like stars at earlier or later stages in their life, to understand how the young Sun was and how the old Sun will be in the far future.

Many scientists are also interested in using information from the Solar System to find Earth-like planets elsewhere in the galaxy. One complication in this research is that light from stars fluctuates, both due to stellar “weather” and simply as the stars spin. These variations can mimic or mask the signal from exoplanets. For that reason, researchers monitor the Sun’s magnetic fluctuations, as well its light variations on the relatively short periods of time important for exoplanet detection.

The Sun is the only star we can study in detail, providing us with the opportunity to observe stellar internal structure, magnetic fields, and atmosphere. Solar and Heliospheric Observer (SOHO), a space observatory jointly operated by NASA and the European Space Agency (ESA), has been one of the best sources for that knowledge. Originally designed to operate for two years, SOHO has provided daily data on the Sun for more than twenty years, making it one of the longest running space observatories. During that time, SOHO has monitored the Sun’s atmosphere, surface, and seismology, using a wide range of scientific instruments. Scientists and engineers at the Center for Astrophysics | Harvard & Smithsonian developed the instrument SOHO uses to measure the ultraviolet spectrum of the Sun.

The Sun is both life-giving and dangerous. Variations in the Sun’s light and wind have profound effects on Earth, while solar storms can wreak havoc on power and communications systems. NASA’s Solar Dynamics Observatory (SDO) is a spacecraft dedicated to studying these potentially dangerous variations, and the magnetic fields that drive them. Engineers at the Center for Astrophysics | Harvard & Smithsonian contributed to the design and construction of the four Atmospheric Imaging Array (AIA) telescopes. AIA is one of the three major experiments carried by SDO.

The Coronal Spectrographic Imager in the EUV (COSIE)

Space weather is a matter of concern for all of us: storms from the Sun can disrupt global communications and electrical power grids. However, we still don’t understand exactly how these storms are formed, much less how to predict them. To complement existing solar observations, the Coronal Spectrographic Imager in the EUV (COSIE) is a proposed telescope for use on the International Space Station, designed to view the Sun in extreme ultraviolet (EUV) light. If the project is selected, COSIE would provide a thousand times improvement in EUV observations of the Sun’s atmosphere over existing telescopes, providing a better means of spotting and predicting solar storms. COSIE is a proposal by researchers at the Center for Astrophysics | Harvard & Smithsonian, who are also developing the technology to make the instrument possible.