Even though astronomers have studied the Sun for centuries, there’s still a lot we don’t fully understand about our closest star. Particularly, solar researchers want to solve the problem of solar storms, where the Sun sends huge amounts of electrically-charged particles into the Solar System. These storms can disrupt communications and power grids on Earth, so it’s more than scientific curiosity that drives this research.

The name “Hinode (ひので)” means “sunrise” in Japanese. The spacecraft is managed by the Japanese Aerospace Exploration Agency (JAXA), in collaboration with NASA, the European Space Agency, and the UK Space Agency. Researchers at the CfA | Harvard & Smithsonian developed the X-ray Telescope (XRT) for Hinode in collaboration with engineers at JAXA. The spacecraft orbits Earth at the precise rate so that it stays above the terminator, the line between day and night, so that Hinode is always able to point at the Sun.

The XRT is capable of taking an image of the entire Sun in X-rays at high resolution. This high energy light doesn’t pierce Earth’s atmosphere, which is why such observations are best done on a spacecraft. Light in the X-ray part of the spectrum largely comes from the Sun’s corona, the wispy outermost layer of the solar atmosphere, where temperatures can reach millions of degrees — much hotter than the surface. During solar storms, huge bursts of this material called “coronal mass ejections” can strike Earth, causing damage to satellites and power grids. As with NASA’s Chandra X-ray Observatory, XRT is a “grazing incidence” telescope, which means the X-ray photons skim across the surface of the mirrors as they are guided into the detectors for analysis. This design is necessary because X-rays pierce normal mirrors rather than reflecting.

Hinode also carries the Solar Optical Telescope for visible-light observations and the Extreme  Ultraviolet Imaging Spectrometer (EIS). Optical observations provide information about the Sun’s surface, including sunspot activity and other phenomena driven by the magnetic field. Like XRT, EIS is designed to help solve the problem of the corona’s extreme temperature.

The Hinode mission was planned to last three years, but the observatory continues to provide quality scientific data far beyond its original specifications. 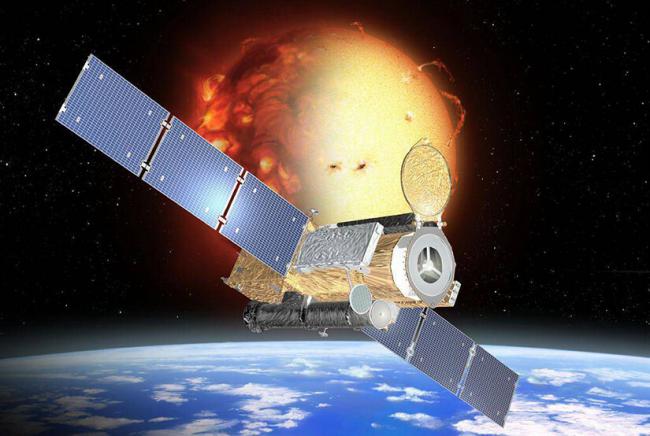 This artistic representation of the Hinode solar observatory spacecraft shows it in orbit around Earth, with the Sun in the background.