Most things in astronomy change too slowly for the human eye to notice. However, change is an important part of astronomical systems, whether it’s comets crossing the Solar System, explosions of stars, collisions of black holes, or exoplanets briefly eclipsing their host stars. Time domain astronomy is dedicated to studying systems that fluctuate measurably during observation. It’s a study that has become more important with the advent of large-scale surveys of the sky, where changes are measurable that were once too small to notice.

Center for Astrophysics | Harvard & Smithsonian astronomers are deeply involved in time domain research in many contexts: 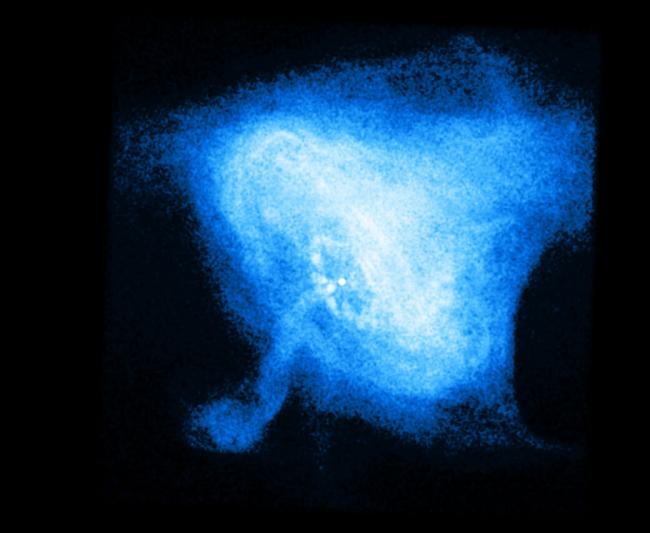 This X-ray image of the Crab Nebula from NASA's Chandra X-ray Observatory is one part of a long-running set of observations to measure how this supernova remnant fluctuates over time.

Time domain astronomy has its roots in antiquity, when ancient astronomers mapped the motion of the planets on the sky. They also distinguished the predictable cycles of planetary motion and eclipses from the things they couldn’t anticipate: the passage of comets or the sudden appearance of new “stars”, which we know today as variable stars, supernovas, and other transient phenomena.

Some transient phenomena last fractions of a second, while others take decades or longer to change noticeably. Time domain astronomy encompasses all of these. Next-generation observatories such as the Large Synoptic Survey Telescope (LSST) are designed to spot many transient events by watching large swaths of the sky again and again. These observations require new methods of data analysis, including machine learning and advanced statistical techniques.

Researchers in the Digital Access to a Sky Century at Harvard (DASCH) project are engaged in digitizing photographic plates taken by astronomers from 1885 through 1992. These cover many different observatories mapping much of the sky. Comparing these historical images with each other and with more recent photographs allows astronomers to spot transient events from more than a century of observations.

Finding potentially habitable exoplanets is a major goal of modern astronomy, but Earth-like worlds in Earth-like orbits are hard to detect. The MINiature Exoplanet Radial Velocity Array (MINERVA) project is a set of small telescopes designed to look at two related but simpler systems: Earth-size planets close to their host stars, and “super-Earths” in more Earth-like orbits. MINERVA is a collaboration between the Center for Astrophysics | Harvard & Smithsonian, the University of Montana, Penn State, the University of Southern Queensland, and the University of Pennsylvania. The telescopes are hosted at the CfA’s Fred Lawrence Whipple Observatory (FLWO) in Arizona.