Supernovas are some of the brightest events in the universe, occasionally outshining entire galaxies at their peak. Many supernovas can be seen from billions of light-years away, and nearby supernovas in past centuries have been visible during the daytime. Today, astronomers distinguish two types of supernova: those involving white dwarfs, and those that are the explosions of very massive stars. Both types are responsible for creating and spreading new elements through space, which are the chemical building blocks for the next generation of stars and planets.

Center for Astrophysics | Harvard & Smithsonian astronomers use many tools to understand supernovas and their remnants: 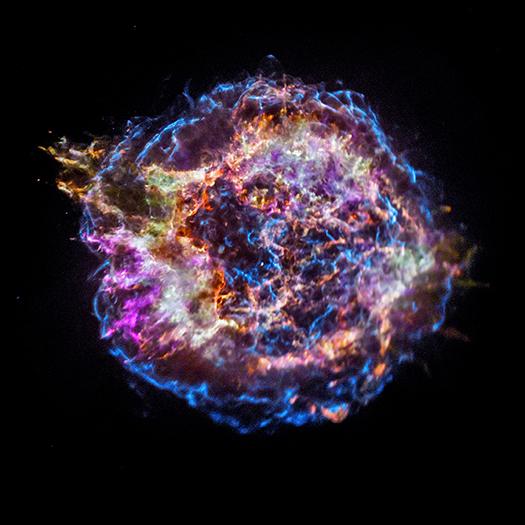 This NASA's Chandra X-ray Observatory image shows glowing material in the Cassiopeia A supernova remnant. The explosions of giant stars seed the cosmos with new chemical elements, providing the raw materials for future stars and planets.

Explosions in the Sky

In the year 1054 CE, observers around the world recorded a new “star” in the sky, which was briefly bright enough to be seen in the daytime, before fading to invisibility. With the advent of telescopes, astronomers connected this with a strangely shaped cloud of gas they named the Crab Nebula. Today, we recognize the “star” was a supernova, and the Crab Nebula is the supernova remnant.

All types of supernovas produce new elements thanks to fusion during the explosion. Much of the iron in the universe comes from Type Ia supernovas, while many heavier elements came from core-collapse supernovas. The outflow of material from the explosions enriches interstellar space, providing the raw materials for new stars and planets. Many of the ingredients that made Earth — including life — came from supernovas.

The Supernova Group at the Center for Astrophysics | Harvard & Smithsonian has cataloged thousands of supernova “light curves”: the increase and decrease of light emission during and after the explosion. These light curves are helpful for identifying the atoms and molecules present in the supernova, measuring the distance to the supernova, and determining what kind of supernova exploded in the first place. https://www.cfa.harvard.edu/supernova/

Supernova explosions are dramatic, but the leftovers are just as interesting from a scientific point of view. These supernova remnants — including the Crab Nebula — contain information about the original system that exploded. They are also hotbeds of activity, containing powerful magnetic fields and hot plasma that can create shock waves in the surrounding material. As a result, supernova remnants are extremely important for understanding the life cycle of stars and physical processes in extreme environments.

With Type Ia supernovas, the exploding stars are completely destroyed. In the case of core-collapse supernovas, however, the remnant also harbors the neutron star or black hole created from the core of the dead star. For example, the Crab Nebula harbors a pulsar, a spinning neutron star that interacts with materials in the supernova remnant. In particular, it creates a disk of hot matter around it and a powerful jet shooting away, which heats up matter around it.