A young pulsar is blazing through the Milky way at a speed of over a million miles per hour. This stellar speedster is one of the fastest objects of its kind ever seen. 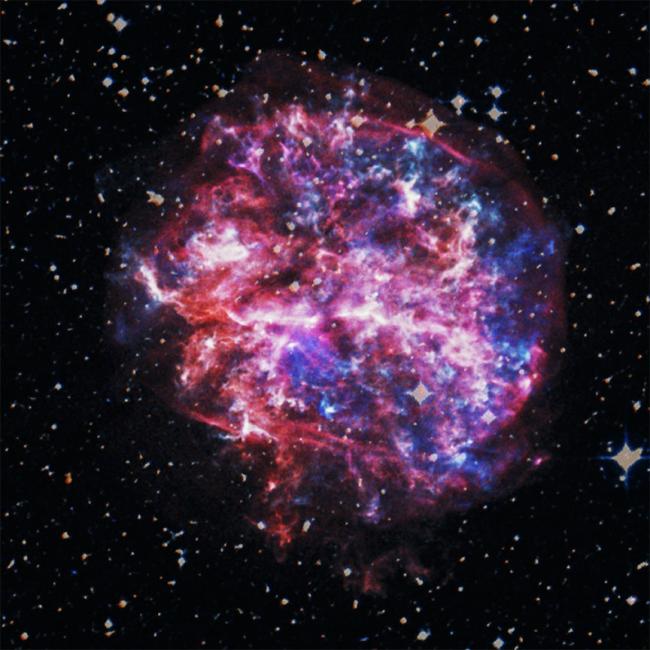 Cambridge, Mass. – A young pulsar is blazing through the Milky Way at a speed of over a million miles per hour. This stellar speedster, witnessed by NASA's Chandra X-ray Observatory, is one of the fastest objects of its kind ever seen. This result teaches astronomers more about how some of the bigger stars end their lives.

Pulsars are rapidly spinning neutron stars that are formed when some massive stars run out of fuel, collapse, and explode. This pulsar is racing through the remains of the supernova explosion that created it, called G292.0+1.8, located about 20,000 light-years from Earth.

"We directly saw motion of the pulsar in X-rays, something we could only do with Chandra's very sharp vision," said Xi Long of the Center for Astrophysics | Harvard & Smithsonian (CfA), who led the study. "Because it is so distant, we had to measure the equivalent of the width of a quarter about 15 miles away to see this motion."

To make this discovery, the researchers compared Chandra images of G292.0+1.8 taken in 2006 and 2016. From the change in position of the pulsar over the 10-year span, they calculated it is moving at least 1.4 million miles per hour from the center of the supernova remnant to the lower left. This speed is about 30% higher than a previous estimate of the pulsar's speed that was based on an indirect method, by measuring how far the pulsar is from the center of the explosion.

"We only have a handful of supernova explosions that also have a reliable historical record tied to them," said co-author Daniel Patnaude, also of the CfA, "so we wanted to check if G292.0+1.8 could be added to this group."

In addition to learning more about the age of G292.0+1.8, the research team also examined how the supernova gave the pulsar its powerful kick. There are two main possibilities, both involving material not being ejected by the supernova evenly in all directions. One possibility is that neutrinos produced in the explosion are ejected from the explosion asymmetrically, and the other is that the debris from the explosion is ejected asymmetrically. If the material has a preferred direction the pulsar will be kicked in the opposite direction because of the principle of physics called the conservation of momentum.

The amount of asymmetry of neutrinos required to explain the high speed in this latest result would be extreme, supporting the explanation that asymmetry in the explosion debris gave the pulsar its kick. This agrees with a previous observation that the pulsar is moving in the opposite direction from the bulk of the X-ray-emitting gas.

The energy imparted to the pulsar from this explosion was gigantic. Although only about 10 miles across, the pulsar's mass is 500,000 times that of Earth, and it is traveling 20 times faster than Earth's speed orbiting the Sun.

"This pulsar is about 200 million times more energetic than Earth's motion around the Sun," said co-author Paul Plucinsky, also of CfA. "It appears to have received its powerful kick just because the supernova explosion was asymmetric."

The true speed through space is likely to be higher than 1.4 million miles per hour because the imaging technique only measures motion from side to side, rather than along our line of sight to the pulsar. An independent Chandra study of G292.0+1.8 led by Tea Temim of Princeton University suggests that the speed along the line of sight is about 800,000 miles per hour, giving a total speed of 1.6 million miles per hour. A paper describing this work was recently accepted for publication in The Astrophysical Journal.

The researchers were able to measure such a small shift because they combined Chandra's high-resolution images with a careful technique of checking the coordinates of the pulsar and other X-ray sources by using precise positions from the European Space Agency's Gaia satellite.

The latest work by Xi and team on G292.0+1.8 was presented at the 240th meeting of the American Astronomical Society meeting in Pasadena, California. The results are also discussed in a paper that has been accepted into ApJ and is available online.