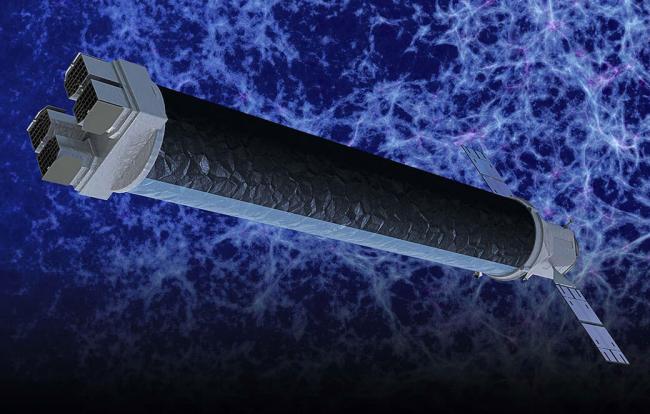 An artist's impression of the proposed Arcus X-ray observatory, which will provide detailed information on the X-ray spectrum of many astronomical systems. The Arcus spacecraft will orbit Earth in a wide elliptical path.

The design of Arcus will allow it to observe a wide variety of astronomical systems, including dust surrounding newborn stars, the hot plasma both inside and outside galaxy clusters, the outflow of material from supermassive black holes at the centers of galaxies, and many others. This will provide valuable insight into the formation and evolution of structure in the universe, as well as the complex interactions between black holes and their host galaxies.

Arcus will be an X-ray spectrometer, which means rather than capturing images of its objects of study, it will split the light into its component wavelengths. That reveals information about the composition, ionization, and velocity of the source. Arcus is designed to fill a need in X-ray astronomy, offering capabilities no other current or future mission has. Complementary to NASA’s Chandra X-ray Observatory, Arcus will measure the spectrum of X-ray sources with as much as a hundred times the sensitivity of other X-ray telescopes, including other future observatories.

The spacecraft carrying the spectrometer is the same basic platform as many other NASA observatories, including the TESS exoplanet hunter. Arcus will orbit Earth in a wide ellipse to provide clear views of the sky, using the combined gravity of Earth and the Moon to stabilize its trajectory and save on fuel.

The spectrometer design was originally intended to be part of the International X-ray Observatory (IXO), but split into its own project as a reflection of NASA’s priorities for smaller space missions. The CfA is leading the Arcus project, in collaboration with researchers from NASA's Ames Research Center, NASA’s Goddard Space Flight Center, the Massachusetts Institute of Technology, Pennsylvania State University, and the Max Planck Institute for Extraterrestrial Physics.