Unlike visible light, X-ray photons are absorbed by most materials rather than reflected by them, so ordinary mirrors are useless for X-ray astronomy. As a result, early X-ray telescopes simply collected light without trying to focus it into images. By the late 1970s, researchers developed “grazing incidence” mirrors, in which X-ray photons bounce off the surface at very shallow angles, akin to skipping rocks across the surface of a pond.

Most X-rays are blocked by Earth’s atmosphere, so X-ray telescopes are usually flown aboard spacecraft. The Einstein Observatory was the second X-ray telescope that could focus X-rays, following a solar X-ray telescope on the Skylab space station, and the first designed for observing sources beyond the Solar System. The grazing incidence telescope was developed by researchers at the CfA | Harvard & Smithsonian, leading the way toward all subsequent imaging X-ray observatories. Einstein’s modern-day successor, NASA’s Chandra X-ray Observatory, also uses grazing incidence mirrors.

Originally designated HEAO 2, the Einstein Observatory was the second part of a trio of space observatories in NASA’s High Energy Astronomy Observatory Program (HEAO) in the late 1970s and early 1980s. The other two spacecraft were HEAO 1 and HEAO 3, designed to observe gamma rays and the electrically charged particles known as cosmic rays. The Einstein Observatory launched in 1978 and operated until 1981, when a control system failed and the telescope could no longer be pointed. The spacecraft burned up in Earth’s atmosphere in 1982.

During its lifetime, astronomers used the Einstein Observatory to study the remnants of supernovas, the hot rapidly-spinning neutron stars known as X-ray pulsars, and structure in the hot plasma between galaxies in galaxy clusters. Data from the observatory showed that much of the X-ray background detected by earlier telescopes came from black holes, and revealed individual X-ray sources in nearby galaxies. 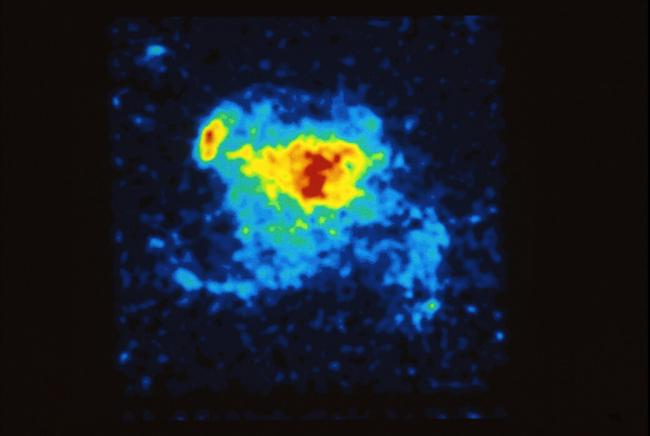 The W28 supernova remnant — the hot remains of an exploded star — as seen in X-rays by the Einstein Observatory, a predecessor to the modern Chandra X-ray Observatory.