Astronomers produce the most robust catalog to date of short gamma-ray burst hosts. 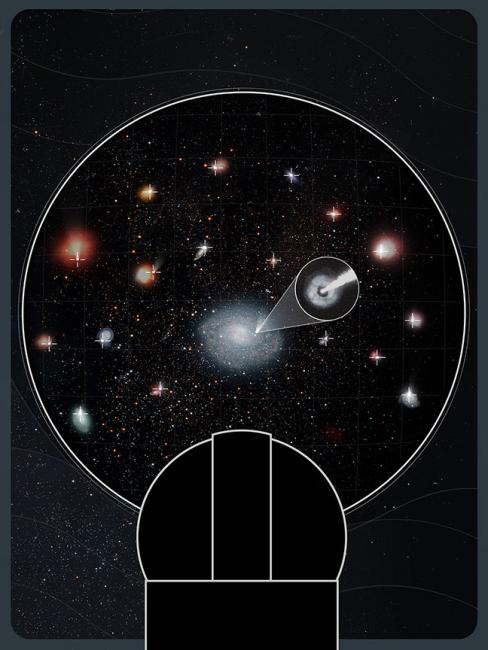 Cambridge, MA – Short gamma-ray bursts (GRBs) are some of the most powerful and luminous cosmic explosions since the Big Bang. Despite this, only a few of these short flashes of radiation are detected by Earth-orbiting satellites each year.

Now, in a pair of new papers in The Astrophysical Journal, astronomers have published the largest study to date of the environments and conditions that give rise to these powerful explosions, providing a new framework for interpreting their origins.

While short GRBs have been known to exist since the early 1990s, it is only over the past two decades that their "afterglows" — accompanying and longer lasting radiation at X-ray, visible, and radio waves — have been detected, leading to precise locations in the sky. Initial studies of these precisely localized short GRBs have led astronomers to conclude that they most likely arise from the collisions of neutron stars. This association was confirmed by the first joint detection of gravitational waves and a short GRB on August 17, 2017.

Edo Berger, professor of astronomy at Harvard University and the Center for Astrophysics | Harvard & Smithsonian and co-author of the new studies, says that for the past two decades, the research team has been studying short GRBs, their afterglows, and their environments one event at a time.

"The gravitational wave event GW170817 provided the final proof of an association with neutron star collisions," Berger emphasizes. "Our key goal now is to determine how these systems formed across cosmic history."

In one of the new papers, led by Wen-fai Fong, professor of astronomy at Northwestern University, an extensive study of 84 galaxies that have hosted short GRBs reveals detailed properties of the population. The sample of galaxies, which is at least three times larger than any previous study, was observed extensively using tens of nights with the 6.5-meter Magellan telescopes at Las Campanas Observatory of the Carnegie Institution for Science in Chile; the 6.5-meter MMT Observatory at the Fred L. Whipple Observatory in Arizona; and the 10-m Keck Telescopes on the summit of Maunakea in Hawaii.

"We have spent the past several years painstakingly studying each galaxy that has had the fortune to host a short GRB using some of the most powerful telescopes in the world. One key finding from this work is that short GRBs exist at earlier cosmic times than previously known. Understanding the distribution of short GRB redshifts, and hence the cosmic epoch at which they occur, provides a direct view of the merger history of neutron stars," says Fong.

The finding that more short GRBs occur at larger redshifts shows that there is a larger population of fast merging binaries than previously known, the team says.

In a companion paper covering the properties of the stellar population of short GRB host galaxies, led by graduate student Anya Nugent at Northwestern University, it was found that most of the galaxies hosting short GRBs are relatively young, actively star-forming galaxies, and generally similar to the population of normal field galaxies.

"This is significant, as it shows that neutron star systems can form in a wide range of environments and that most have relatively short formation timescales, as the stars around many short GRBs are still young," Nugent notes.

The relative dearth of massive old galaxies in the sample is puzzling given that the binary neutron star merger GW170817 occurred in exactly such an environment.

"GW170817 is so far the only short GRB found through gravitational waves, so it is hard to reach firm conclusions about the population," says Nugent. "From the much larger population of short GRB environments studied here, we find that the environment of GW170817 is actually quite rare in the overall population."

The short GRBs in the sample were initially detected with the Neil Gehrels Swift Observatory, NASA's space observatory dedicated to the study of gamma-ray bursts. The exact locations of the short GRBs were then determined by capturing the afterglow of each event using telescopes all over the world and in space. The host galaxies were then identified, and studied with photometry and spectroscopy using the Magellan, MMT, LBT, Gemini, and Keck telescopes.

The current catalog of short GRB host observations and stellar population properties is available at bright.ciera.northwestern.edu.

The researchers plan to keep the site updated as new detections are obtained.

Fong says, "Our extensive work, and the resulting catalog of galaxies, will contribute greatly to discussions about the best methods for tracking and interpreting neutron star merger gravitational wave events, and their environments. After more than a decade of work, we now have the most complete sample."