The Sun is the only star we can study in detail, providing us with the opportunity to observe stellar internal structure, magnetic fields, and atmosphere. Solar and Heliospheric Observer (SOHO), a space observatory jointly operated by NASA and the European Space Agency (ESA), has been one of the best sources for that knowledge. Originally designed to operate for two years, SOHO has provided daily data on the Sun for more than twenty years, making it one of the longest running space observatories. During that time, SOHO has monitored the Sun’s atmosphere, surface, and seismology, using a wide range of scientific instruments. Scientists and engineers at the Center for Astrophysics | Harvard & Smithsonian developed the instrument SOHO uses to measure the ultraviolet spectrum of the Sun. 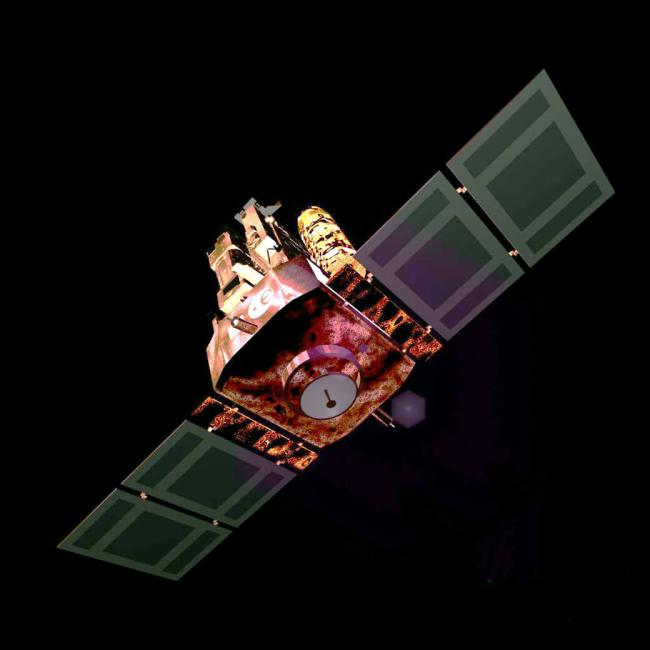 This artistic rendition shows the SOHO spacecraft as it orbits the Sun, where it has monitored the solar atmosphere and surface since 1996. SOHO weighs about two tons and is about 25 feet across with its solar panels extended.

The Sun is a dynamic place. Its surface vibrates as waves of hot plasma surge and interact with each other; sunspots come and go with variations in the solar magnetic field; the hot shroud of gas called the corona billows and sends huge storms of electrically charged particles out into the Solar System. All of these aspects are important for understanding the shared history of the Sun and Earth, and how our host star has affected life as we know it.

SOHO was built as a general solar observatory, with twelve suites of scientific instruments to track all of these properties of the Sun. During its operations, it has provided important insights, including: details about the interior of the Sun, including what sunspots look like beneath the surface; measurements of the speed of the solar wind, the charged particles that escape from the corona; mapping the magnetic field behavior over the Sun’s surface; and revealing new phenomena such as “solar tornadoes”.

Built in Europe, SOHO is operated jointly by ESA and NASA, with contributions from a large number of scientists, engineers, and other staff around the world. The spacecraft was launched in 1995 with a planned two-year mission. Its work was successful enough to justify keeping the observatory going, and it’s still operating more than 20 years later. The probe orbits the Sun at a place where the gravity of the Sun and Earth balance each other out, known as the first Lagrange point (L1). The Wind and DSCOVR solar-wind observatories also orbit at L1.

CfA scientists and engineers provided SOHO’s Ultraviolet Coronagraph Spectrometer (UVCS), which operated until 2013 and measured the ultraviolet spectrum of the hot solar atmosphere. UVCS provided the insight that the corona is too hot to be produced by ordinary thermal transfer, where particles collide and pass energy to each other. Instead, the corona and solar wind must be accelerated by the magnetic field interactions in some way.

Other SOHO instruments measure the speed and composition of the solar wind; the seismic waves that travel across the Sun’s surface; the fluctuations in the temperature, composition, and density of different parts of corona; and the motion of matter upward from the Sun’s interior to its surface. Many of these instruments produce images of the Sun, which are posted on NASA’s SOHO website, providing a regularly-updated view of the Sun in many different wavelengths of light.