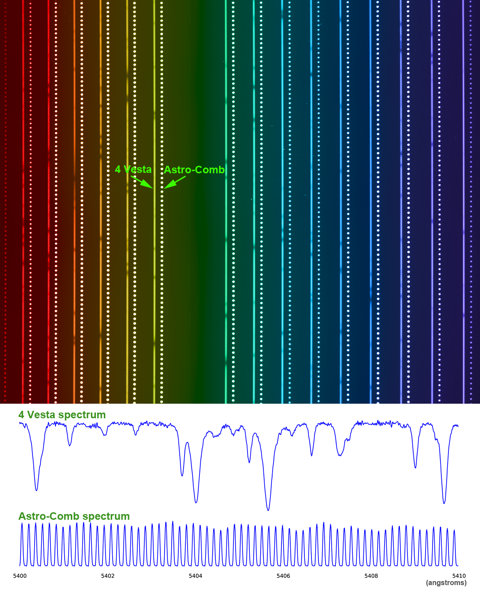 Astronomers Chih-Hao Li and David Phillips of the Harvard-Smithsonian Center for Astrophysics want to rediscover Venus—that familiar, nearby planet stargazers can see with the naked eye much of the year.

Granted, humans first discovered Venus in ancient times. But Li and Phillips have something distinctly modern in mind. They plan to find the second planet again using a powerful new optical device installed on the Italian National Telescope that will measure Venus' precise gravitational pull on the sun. If they succeed, their first-of-its-kind demonstration of this new technology will be used for finding Earth-like exoplanets orbiting distant stars.

"We are building a telescope that will let us see the sun the way we would see other stars," said Phillips, who is a staff scientist at the Harvard-Smithsonian Center for Astrophysics. He and Li, a research associate at the Center for Astrophysics, will describe the device in a paper to be presented at The Optical Society's (OSA) 98th Annual Meeting, Frontiers in Optics, being held Oct. 19-23 in Tucson, Arizona, USA. Li is the lead author of the paper, which has 12 collaborators.

Astronomers have identified more than 1,700 exoplanets, some as far as hundreds of light years away. Most were discovered by the traditional transit method, which measures the decrease in brightness when a planet orbiting a distant star transits that luminous body, moving directly between the Earth and the star. This provides information about the planet's size, but not its mass.

Li and Phillips are developing a new laser-based technology known as the green astro-comb for use with the "radial velocity method," which offers complementary information about the mass of the distant planet. From this information, astronomers will be able to determine whether distant exoplanets they discover are rocky worlds like Earth or less dense gas giants like Jupiter. The method is precise enough to help astronomers identify Earth-like planets in the "habitable zone," the orbital distance “sweet-spot” where water exists as a liquid.

Better Precision with a Laser

The radial velocity method works by measuring how exoplanet gravity changes the light emitted from its star. As exoplanets circle a star, their gravitation tugs at the star changing the speed with which it moves toward or away from Earth by a small amount. The star speeds up slightly as it approaches Earth, with each light wave taking a fraction of a second less time to arrive than the wave before it. To an observer on Earth, the crests of these waves look closer together than they should, so they appear to have a higher frequency and look bluer. As the star recedes, the crests move further apart and the frequencies seem lower and redder.

This motion-based frequency change is known as the Doppler shift. Astronomers measure it by capturing the spectrum of a star on the pixels of a digital camera and watching how it changes over time.

Today's best spectrographs are only capable of measuring Doppler shifts caused by velocity changes of 1 meter per second or more. Only large gas giants or “super-earths” close to their host stars have enough gravity to cause those changes.

The new astro-comb Li, Phillips and their colleagues are developing, however, will be able to detect Doppler shifts as small as 10 centimeters per second—small enough to find habitable zone Earth-like planets, even from hundreds of light years away.

"The astro-comb works by injecting 8,000 lines of laser light into the spectrograph. They hit the same pixels as starlight of the same wavelength. This creates a comb-like set of lines that lets us map the spectrograph down to 1/10,000 of a pixel. So if I have light on this section of the pixel, I can tell you the precise wavelength," Phillips explained.

Li and his co-researchers pioneered the astro-comb several years ago, but it only worked with infrared and blue light. Their new version of the astro-comb lets astronomers measure green light—which is better for finding exoplanets.

"The stars we look at are brightest in the green visible range, and this is the range spectrographs are built to handle," Phillips said.

Building the green astro-comb was a challenge, since the researchers needed to convert red laser light to green frequencies. They did it by making small fibers that convert one color of light to another.

"Red light goes in and green light comes out," Phillips said. "Even though I see it every day and understand the physics, it looks like magic."

The researchers plan to test the green astro-comb by pointing it at our sun, analyzing its spectrum to see if they can find Venus and rediscover its characteristic period of revolution, its size, its mass and its composition.

"We know a lot about Venus, and we can compare our answers to what we already know, so we are more confident about our answers when we point our spectrographs at distant stars," Li said.

The Harvard-Smithsonian team is installing this device on the High-Accuracy Radial Velocity Planet Searcher-North (HARPS-N), a new spectrograph designed to search for exoplanets using the Italian National Telescope.

"We will look at the thousands of potential exoplanets identified by the Kepler satellite telescope by the transit method. Together, our two methods can tell us a lot about those worlds," Li said.

And, because he will have already discovered Venus, he will be more certain of the answers.