The SMA is a type of multiple-antenna observatory known as an interferometer, in this case consisting of eight radio dishes, each 6 meters in diameter. The eight antennas observe the same astronomical object simultaneously. Combining the light measured by all the dishes produces an interference pattern, which results in a sharper image than could be made by any of the individual antennas. For that reason, the eight-antenna interferometer behaves like a single telescope as much as 500 meters (one-third of a mile) across.

The observatory is designed to take images in light of wavelengths of about a millimeter, which lies at the boundary between infrared and radio wavelengths. This type of light is emitted by the interstellar clouds that provide the raw materials for star formation. In addition, this light pierces through the dust that shrouds many objects, hiding them from view at visible light wavelengths. Many molecules have unique spectral emission and absorption fingerprints at submillimeter wavelengths, allowing the SMA to identify them and measure their motions using the Doppler effect.

For these reasons, the SMA is a powerful tool for studying the birth of planets, stars, galaxies, and the complex molecules essential for life as we know it. The SMA is also a key telescope in the Event Horizon Telescope (EHT), an Earth-sized interferometer which created the first images of a supermassive black hole: specifically, the black hole at the center of the nearby galaxy M87. 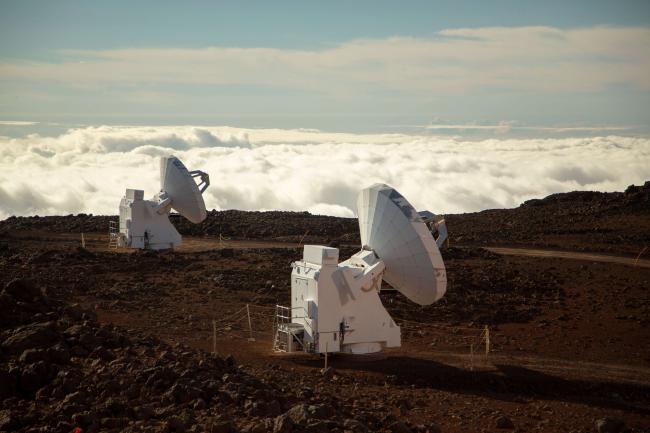 Two of the dishes comprising the Submillimeter Array (SMA) on Maunakea in Hawaii.

Water vapor in Earth’s atmosphere absorbs much of the light at the wavelengths observed by the SMA, which is why the observatory was built near the summit of Maunakea, a dormant volcano on the Big Island of Hawaii. Maunakea rises 4,200 meters above sea level, and the summit is usually above more than 90% of the water vapor in the atmosphere.

As Hawaii’s highest mountain, Maunakea has long had deep cultural significance. The SMA is one of several astronomical observatories on the mountain, and is fortunate to be able to use this excellent site to further our understanding of the universe and our own origins. 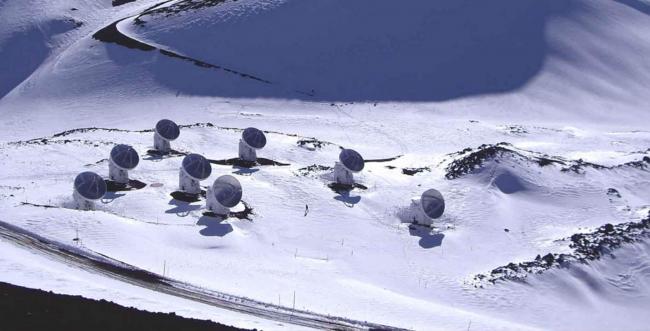 The eight 6-meter dishes comprising the Submillimeter Array act together as a single telescope.

DIRECTIONS TO THE SUBMILLIMETER ARRAY