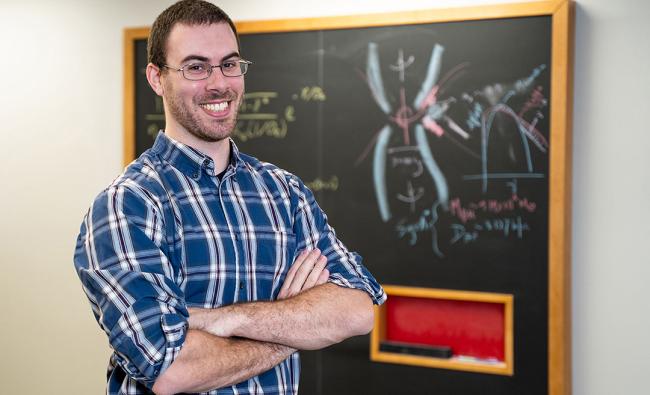 Two-and-a-half trillion pages of printed text — that's how much data researchers must gather up to catch even a mere glimpse of a distant black hole. The pages are the equivalent of five petabytes-worth of data captured by the Event Horizon Telescope (EHT), a planet-spanning array of radio telescopes responsible for the first image of a black in 2019 and now, the supermassive black hole at the heart of our own Milky Way galaxy.

This massive haul, however, contains very little signal from the black hole itself; only about 0.01 percent of the captured radio signal originates from the black hole and its immediate surroundings. Researchers therefore face a considerable challenge of processing all that data to separate the scientific wheat from the chaff.

Turning that wheat into bread, so to speak, is a key contribution made by EHT member Dominic "Dom" Pesce, 31, an astrophysicist at the Center for Astrophysics | Harvard & Smithsonian. He and his colleagues connect what the telescopes see in space to scientific theories of what these sights mean.

"We help translate the tremendous volume of observational information, which is raw and hard to parse, into the scientific quantities we care about by connecting boiled-down, pertinent data to our ideas of how black holes function," says Pesce, whose formal title for the EHT project is co-coordinator for the model comparison and feature extraction working group. "Our goal is to eke out the little bit of signal amidst a sea of noise."

When data comes to Pesce, it has already gone through significant initial rounds of reduction and calibration addressing, for example, conditions on the night of observing and instrumental particularities. Pesce helps analyze the refined data products further by matching them to theoretical models of the possible structure of the black hole and its surrounding whirlpool of matter, called an accretion disk.

Black holes have fascinated Pesce ever since childhood he says, when he glommed on to "things kids typically think are cool, like dinosaurs and space."

Growing up out on Long Island, near where the island forks at its eastern end, Pesce found he had an academic propensity for math and science. He accordingly majored in physics and astronomy at Harvard, then went on to earn his PhD in astrophysics at the University of Virginia where he focused on gauging the distances to black holes using radio telescopes. For his postdoc, Pesce returned to Harvard, where his advisor and mentor has been Sheperd "Shep" Doeleman, an astrophysicist at the Center for Astrophysics and the founding director of the EHT.

Throughout his academic career, Pesce has specialized in bringing statistical tools to aid in dealing with the challenging problems posed by voluminous and noisy astrophysical data. While these efforts are fundamental to the endeavor of science, Pesce acknowledges that chi-squared tests and p-values aren't everyone's cup of tea.

"I discovered in myself along the way that I derive enjoyment from things some other people find completely dry," Pesce says with a laugh.

When away from astrophysical affairs, Pesce plays piano as a hobby. While classically trained, though not at the professional concert-level, Pesce can nevertheless jokingly claim he got to perform once at Lincoln Center — back in 2007 or 2008, he's not quite sure — with his high school choir as part of the famed venue's youth music outreach program.

Pesce is also an avid reader of fantasy novels. He counts Brandon Sanderson among his favorite authors because of Sanderson's attention to detail in crafting rigorous 'Laws of Magic' that characters adhere to across many of his works.

"I think because of my background in physical sciences, it's important to me that there are rules and self-consistency to the magic systems in these books," says Pesce.

In his own way, within the once-fantastical realm of black hole astrophysics, Pesce is likewise establishing enduring scientific principles and methods.