Using a special "magnifying glass," astronomers have zoomed into black holes that otherwise would be too faint to detect. 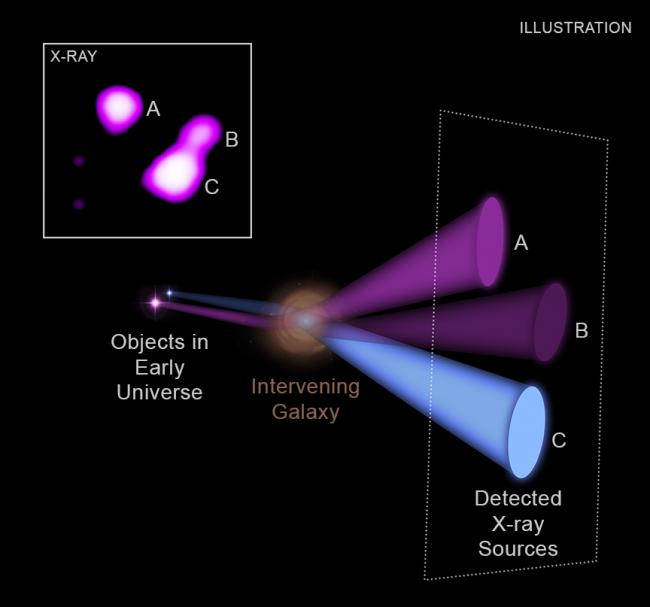 Cambridge, MA -- By taking advantage of a natural lens in space, astronomers have captured an unprecedented look at X-rays from a black hole system in the early universe.

This magnifying glass was used to sharpen X-ray images for the first time using NASA’s Chandra X-ray Observatory. It captured details about black holes that would normally be too distant to study using existing X-ray telescopes.

Astronomers applied a phenomenon known as "gravitational lensing" that occurs when the path taken by light from distant objects is bent by a large concentration of mass, such as a galaxy, that lies along the line of sight. This lensing can magnify the light by large amounts and create duplicate images of the same object. The configuration of these duplicate images can be used to decipher the complexity of the object and sharpen images.

The gravitationally-lensed system in the new study, published in The Astrophysical Journal, is called MG B2016+112. The X-rays detected by Chandra were emitted by this system when the universe was only 2 billion years old compared to its current age of nearly 14 billion years.

"Our efforts to see and understand such distant objects in X-rays would be doomed if we didn't have a natural magnifying glass like this," says Dan Schwartz of the Center for Astrophysics | Harvard & Smithsonian (CfA), who led the study.

The latest research builds on earlier work led by co-author Cristiana Spingola, currently at the Italian National Institute for Astrophysics (INAF) in Bologna, Italy. Using radio observations of MG B2016+112, her team found evidence for a pair of rapidly growing supermassive black holes separated by only about 650 light-years. They found that both of the black hole candidates possibly have jets.

Using a gravitational lensing model based on the radio data, Schwartz and his colleagues concluded that the three X-ray sources they detected from the MG B2016+112 system must have resulted from the lensing of two distinct objects. These two X-ray-emitting objects are likely a pair of growing supermassive black holes or a growing supermassive black hole and its jet. The estimated separation of these two objects is consistent with the radio work.

Previous Chandra measurements of pairs or trios of growing supermassive black holes have generally involved objects much closer to Earth, or with much larger separations between the objects. An X-ray jet at an even larger distance from Earth has previously been observed, with light emitted when the universe was only 7% of its current age. However, the emission from the jet is separated from the black hole by about 160,000 light-years.

The present result is important because it provides crucial information about the speed of growth of black holes in the early universe and the detection of a possible double black hole system. The gravitational lens magnifies the light from these far-flung objects that otherwise would be too faint to detect. The detected X-ray light from one of the objects in MG B2016+112 may be up to 300 times brighter than it would have been without the lensing.

"Astronomers have discovered black holes with masses billions of times greater than that of our Sun being formed just hundreds of millions of years after the big bang, when the universe was only a few percent of its current age," says Spingola. "We want to solve the mystery of how these supermassive black holes gained mass so quickly."

The boosts from gravitational lensing may enable researchers to estimate how many systems containing two supermassive black holes have separations small enough to produce gravitational waves observable in the future with space-based detectors.

"In many ways, this result is an exciting proof-of-concept of how this 'magnifying glass' can help us reveal physics of the distant supermassive black holes in a novel approach. Without this effect Chandra would have had to observe it a few hundred times longer and even then would not reveal the complex structures," says co-author Anna Barnacka of the CfA and Jagiellonian University in Poland, who developed the techniques for turning gravitational lenses into high-resolution telescopes to sharpen the images.

"Thanks to gravitational lensing much longer Chandra observations may be able to distinguish between the black hole pair and the black hole plus jet explanations. We also look forward to applying this technique in the future, especially as surveys by major new optical and radio facilities that will soon come on line will supply tens of thousands of targets," Schwartz concludes.

The uncertainty in the X-ray position of one of the objects in MG B2016+112 is 130 light-years in one dimension and 2,000 light-years in the other, perpendicular dimension. This means that the size of the area where the source is likely located is more than 100 times smaller than the corresponding area for a typical Chandra source that is not lensed. Such precision in a position determination is unparalleled in X-ray astronomy for a source at this distance.