The best telescopes in the world are only as good as the technology used in detecting light from astronomical phenomena. Modern detector technology does far more than just take pretty pictures: it’s the way astronomers get any data about the stars, galaxies, and other bodies they study. Astronomical detectors use cutting-edge materials and electronics research to provide the best information possible to astronomers.

Center for Astrophysics | Harvard & Smithsonian researchers engage in detector research, both in building instruments for observatories and developing new technologies:

For thousands of years, the human eye was the only detector technology available. The earliest observational tools, including the first telescopes, relied on an astronomer to actually see the astronomical body. In the 19th century, astronomers began using photography, but also prisms and gratings to split light into its spectrum. Both methods opened new avenues for discovery beyond what the eye can see. 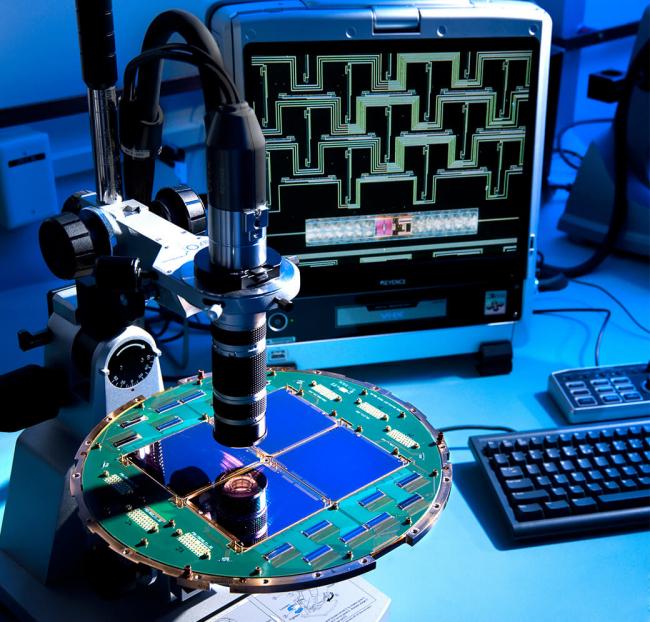 One of the biggest advances in astronomy came from quantum physics. Charged-coupled devices (CCDs) are based on the fact that light is made up of individual particles called photons. As quantum physics describes, a photon can knock electrons out of a material, which is called the photoelectric effect. CCDs record the electrical signal produced by the photoelectric effect, allowing them to detect individual photons of certain wavelengths.

That ability makes CCDs far more sensitive than photography, so astronomers could detect fainter objects, see details in closer objects, and view more distant phenomena than ever before. In addition, CCDs can view the sky continuously, unlike film, which has to be changed once it has reached optimum exposure. Modern personal digital cameras use CCD technology, but filter light differently than observatories do.

As electronics get cheaper, some telescopes now use a slightly different type of detector, based on the same electronics used in computers: complementary metal–oxide–semiconductor (CMOS) detectors. These are less expensive than CCDs, use less energy, and are potentially better for higher-energy light such as X-rays. CMOS detectors also respond faster to light, which means they produce images more quickly. Researchers are developing detectors that reduce many of the trade-offs from using CMOS detectors, including some undesirable electronic noise.

In astronomy, CCDs are used across a wide spectrum, primarily visible, infrared, and ultraviolet light. While NASA’s Chandra X-ray Observatory also uses a type of CCD in one of its detectors,  astronomers need other types of detectors for different observations.

One of these is a “bolometer”, which uses the fact that light carries energy. That energy warms up a material it strikes. Bolometers used in precision microwave and radio detectors are kept at super-cold temperatures, where the material is a superconductor: electricity flows without resistance. When a photon strikes, it warms the superconductor just enough for it to transition to a normal material.

Like CCDs, bolometers can detect single photons. They’re most useful when astronomers need to measure light from low energy sources, which produce photons too weak to trigger the photoelectric effect. Bolometers are used in microwave observatories such as the South Pole Telescope (SPT), which measures the cosmic microwave background, light from when the universe was less than a half a million years old.

Can Cosmic Inflation be Ruled Out?