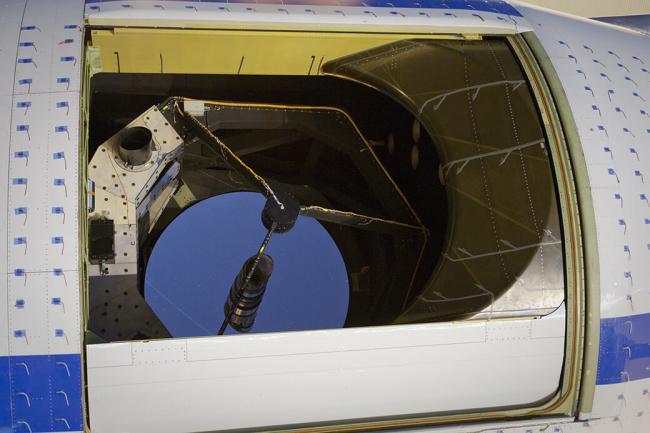 Faint specks of starlight are reflected by the 100-inch (2.5-meter) primary mirror on NASA's Stratospheric Observatory for Infrared Astronomy (SOFIA) during ground testing of the Faint Object Infrared Camera for the SOFIA Telescope (FORCAST).

A wide range of astronomical phenomena produce infrared light, from the interstellar dust clouds where new stars are born, to the matter swirling around supermassive black holes. However, many infrared wavelengths are absorbed or scattered by molecules in Earth’s atmosphere, requiring the use of high-altitude or space observatories.

SOFIA is carried aboard an airplane capable of flying at an altitude of 13 kilometers (45,000 feet), higher than 99% of the infrared-absorbing atmosphere. First flown in 2007, SOFIA provided the first measurements of Pluto’s atmosphere, mapped the dust and magnetic fields around black holes, and provided a wealth of information about star-forming nebulas. 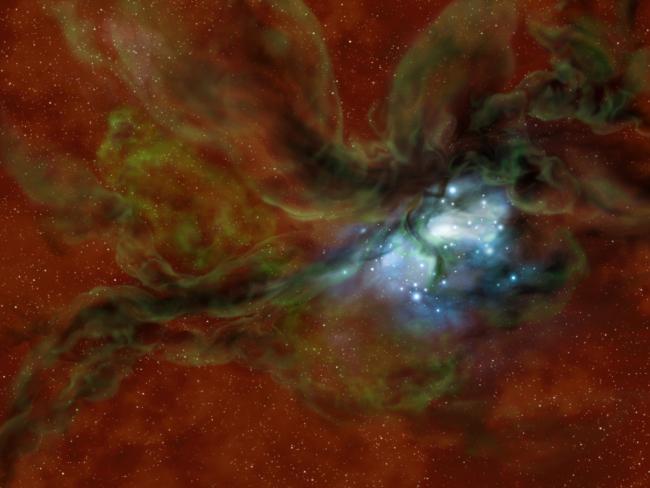 Artist’s impression of a star cluster forming from the collision of molecular clouds — the dark shapes in the image — based on SOFIA observations of atoms (shown in green).

The telescope consists of a 2.5-meter (8.2-foot) mirror and a suite of scientific instruments, including photometers to measure the brightness of sources, spectrometers to split the light into its component wavelengths, and a polarimeter to measure the polarization of light caused by dust particles.

Astronomer Gerard Kuiper is best known for his prediction of the Kuiper Belt of icy outer Solar System bodies, but in 1965, he used a high-flying NASA airplane to study Venus in infrared light, pioneering the use of aircraft for astronomy. SOFIA is Kuiper’s spiritual descendant, built on a larger scale and using a dedicated airplane. The SOFIA telescope is carried by a Boeing 747SP (“special purpose”) designed for long duration flights. The airplane was modified in several ways, including a large opening in the side for the telescope.

To operate under these conditions, SOFIA is lightweight and built to withstand mechanical vibrations and turbulence from air flowing across the opening in the side of the airplane. The airplane is capable of ten-hour flights, with flight paths chosen to keep ahead of the sunrise and maximize the amount of darkness.