Black holes, neutron stars, and white dwarfs also can pull matter into disks. The physical processes that make disks are important for understanding how planets form and how various atoms are distributed through space.

Center for Astrophysics | Harvard & Smithsonian scientists study the various types of astronomical disks in many ways, including:

From Disks to Planets

The force of gravity tends to make things into spheres, which is why planets and stars are round. However, spinning flattens objects out: gas clouds, stars in spiral galaxies, and other systems form disks under rapid rotation.

Stars form out of clouds of gas, which slowly collapse under the force of gravity. The atoms and molecules in the gas impart a small amount of rotation as they fall toward the protostar. That rotation gives the star its spin and creates a rotating platter of gas and dust called a protoplanetary disk. The composition of that disk, including how much mass it has, determines how many planets and what kind are formed.

We are still puzzling out exactly how planets form from these beginnings, since the other known planetary systems don’t resemble our Solar System. Astronomers study disks to understand how they turn into planets, and how those newborn planets move around in the infant system. They also want to know how the various atoms and molecules distribute themselves within the disk, to understand where important chemicals like water and organic molecules end up. That has implications for life, both in the Solar System and elsewhere. 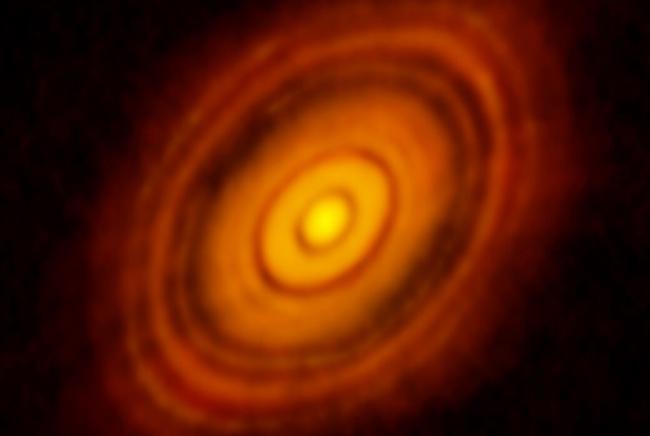 The young star HL Tau is surrounded by a protoplanetary disk, as seen in this image from ALMA. The rings and gaps in the disk mark the likely presence of newborn planets as they gather up dust and gas.

Compact objects have far more intense gravity than stars. These objects are white dwarfs, neutron stars, or stellar-mass black holes — those formed from the deaths of massive stars. When these are in binary systems with ordinary stars, the gravitational tidal force from the compact object can pull the star out of shape to the point where gas flows from the star to its companion. This matter forms an accretion disk, which is much hotter and spins faster than a protoplanetary disk.

As with protoplanetary disks, astronomers study accretion disks to understand the physical processes that make them. Accretion is the precursor to powerful cosmic phenomena like type Ia supernovas, when white dwarfs attract enough mass that they explode. Neutron stars and black holes in binary systems with ordinary stars can be very bright X-ray sources, as the gas they strip from their companion heats up to incandescent temperatures.

Black holes are found in the centers of most galaxies, where they can influence star formation and the distribution of atoms in the environment surrounding them. However, direct observation of a black hole is difficult because it is so small relative to their masses. The Event Horizon Telescope (EHT) captured the first image ever taken of a black hole: specifically, the ring of light produced by matter just as it falls into the black hole at the center of the nearby galaxy M87. The EHT is a virtual observatory consisting of telescopes spanning the planet, from Greenland to the South Pole. The international collaboration operating the EHT includes observatories affiliated with the Center for Astrophysics | Harvard & Smithsonian: the CfA’s Submillimeter Array (SMA) and the Greenland Telescope.