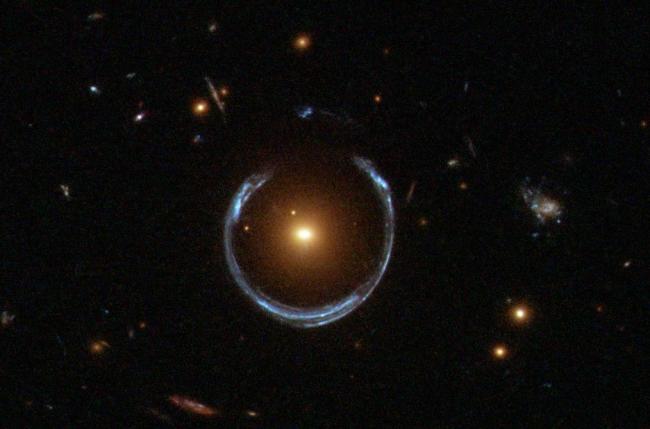 A Hubble image of a red galaxy acting as a gravitational lens for a more distant blue galaxy, bending its light into an arc. Exoplanets can be detected via a similar effect, gravitational microlensing, when a foreground star and its orbiting planet fortuitously pass across a background star in the sky, creating bright flashes. Astronomers have spotted a new microlensed, Jupiter-sized exoplanet around an M dwarf star, and use the result to help decide between competing planet formation scenarios.

Over 4300 exoplanets have been detected to date, over ninety percent of them by using the transit or radial velocity techniques. Of the other ten percent, 105 were found using the microlensing method which takes advantage of the fact that the path of a light beam is bent by the presence of a massive body. The body acts like a lens (a "gravitational lens") to distort the image of an object seen behind it. When a massive object fortuitously passes in front of a star, it acts as a gravitational lens and thus its motion across the sky causes the background star to appear to brighten briefly. When the foreground object is a star hosting a planet, both bodies can produce brightening events as they pass in front of the star, and the flashes as seen from Earth can be modeled to determine their masses and separation.

The microlensing method has two significant advantages over more common exoplanet detection techniques. First, the brightness of the microlensing effect does not depend on the brightness of the moving body, only on its mass, making it possible to spot faint, low-mass M dwarf stars. The second advantage is that the microlensing planet may orbit its star at a large distance, even many astronomical units. (Since normal exoplanet techniques, like transiting, require multiple detections over many orbital periods, exoplanets with large orbits take years to complete their cycle and so far the vast majority of all measured exoplanets have orbits smaller than one astronomical unit.) As a result of their large orbits, the detected giant planets around microlensing host stars are usually far enough away to reside beyond the “snow line,” the distance at which surface water would freeze.

CfA astronomer Jennifer Yee collaborates with a team of astronomers from the OGLE project (Optical Gravitational Lensing Experiment), which discovered the microlensing event OGLE-2017-BLG-1049. The analysis was led by her colleagues in the Korea Microlensing Telescope Network. They modeled the brightening events using some probable assumptions, and concluded that the host star is an M dwarf with a mass of about 0.55 solar-masses; the planet has a mass of about 5.5 Jupiter-masses and orbits at a distance of 3.9 astronomical units. These results have direct implications for models of planet formation. Fifty-four of the known microlensed exoplanets are giants around M dwarfs, like this new one, suggesting that planets are common around M dwarfs. In the core-accretion model of planet formation, however, in which planets gradually assemble from smaller rocks, very few planets are expected to be found around M dwarf stars. The result appears instead to support the alternative disk instability model in which a rotating disk fragments into clumps that form planets, and it predicts that many planets exist around M dwarf stars.