Astronomers study star formation as a way of understanding our own origins, as well as the structure of galaxies and the evolution of the cosmos as a whole. However, the farther back in time, astronomers often rely on a single measurement type for each galaxy to measure star-formation rates. The Star Formation Reference Survey (SFRS) is designed to improve and assess the reliability of all of these measurements by cataloging nearby star formation, using NASA’s Spitzer Infrared Space Telescope and other observatories. The data produced provides a useful reference data across a wide range of wavelengths in the spectrum of light, which can be applied across surveys of star formation in close-by and distant galaxies. The SFRS observational effort is led by astronomers at the Center for Astrophysics | Harvard & Smithsonian, in collaboration with other researchers around the world. 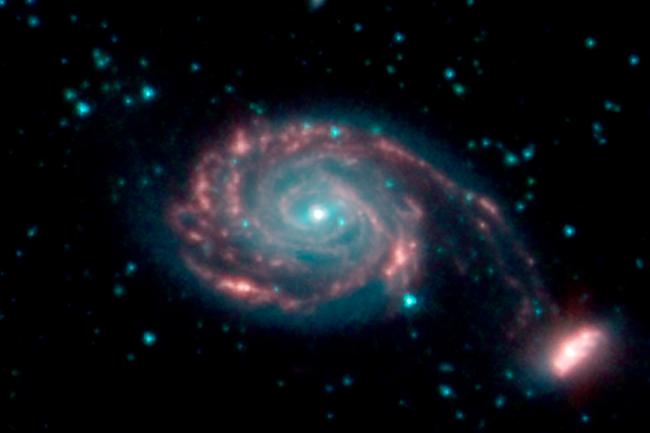 This image shows the merger of two galaxies, known as NGC 7752 (larger) and NGC 7753 (smaller), also collectively called Arp86. In these images, different colors correspond to different wavelengths of infrared light. Blue and green are wavelengths both strongly emitted by stars. Red is a wavelength mostly emitted by dust.

When you look at the sky, all the natural light you see ultimately comes from stars. Earth and everything on it owe their existence to previous generations of stars, which created almost all the necessary elements. The birth of new stars is a profound cosmic event in its own right, shaping the nearby interstellar gas. In starburst galaxies, star formation makes the entire galaxy intensely bright.

The rate and processes of star birth are dependent on the on a number of factors, some of which astronomers understand and others which are still mysterious. These factors become increasingly difficult to observe for distant galaxies, which represent earlier stages of cosmic history. That’s where SFRS comes in: using some of the most powerful ground- and space-based observatories, astronomers built a catalog of relatively nearby star-forming regions, with an emphasis on including all types of star-forming galaxies in sufficiently representative numbers. This catalog also provides a useful benchmark for measuring star formation in distant galaxies.