It is the first unequivocal detection of carbon dioxide in a planetary atmosphere beyond the Solar System. 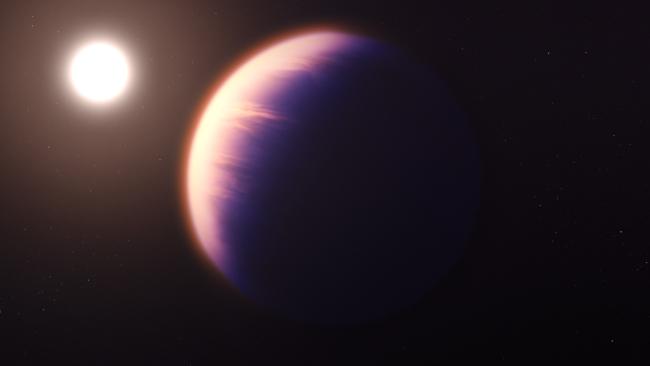 Cambridge, Mass. – Scientists using NASA’s JWST have captured definitive evidence of carbon dioxide (CO2) in the atmosphere of an exoplanet, a planet beyond our Solar System.

The discovery, accepted for publication in the journal Nature, bodes well for the telescope’s ability to detect and measure what planets outside our solar system are made of and provide insight into their formation. Over 100 scientists, including four members of the Center for Astrophysics | Harvard & Smithsonian, worked fast and furiously to fast track the result as part of JWST’s exoplanet Early Release Science team.

“Such a clear detection of carbon dioxide in this planet is exciting because it indicates that we will also be able to detect CO2 in the atmospheres of smaller, terrestrial planets,” says Mercedes López-Morales, a study co-author, core member of the Early Release Science team and astrophysicist at the Center for Astrophysics.

The CO2 molecules were detected in the atmosphere of WASP-39 b, a gas giant orbiting a Sun-like star 700 light-years away. JWST observed the exoplanet on July 10 using the telescope’s Near-Infrared Spectrograph (NIRSpec). 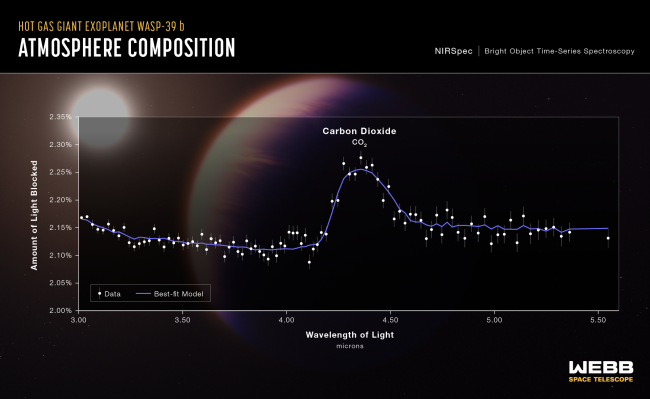 "This is the first time we have seen CO2 in an exoplanet atmosphere, which has incredibly exciting implications for studying carbon and oxygen chemistry in these planets, and in turn on how they form and evolve,” says James Kirk, an astrophysicist at the Center for Astrophysics who contributed to the new result.

The scientific team conducted four analyses on data JWST obtained to reach the conclusion; Kirk single-handedly performed one of the analyses himself.

Scientists have believed that WASP-39 b’s atmosphere may house carbon dioxide since 2018, when observations with NASA's Spitzer Space Telescope revealed hints of the molecule. Previous observations from other telescopes had already revealed the presence of water vapor, sodium, and potassium in the planet’s atmosphere.

Thus the exoplanet was the ideal candidate to follow-up on using the new and improved JWST, says López-Morales.

WASP-39 b has a mass roughly one-quarter that of Jupiter and a diameter 1.3 times greater than Jupiter. Its extreme puffiness is related in part to its high temperature — about 1600°F! It also orbits very close to its star, completing one circuit in just over four Earth-days. The planet’s discovery, reported in 2011, was made based on ground-based detections of the subtle, periodic dimming of light from its host star as the planet transits, or moves across the face of the star.

Transiting planets like WASP-39 b can provide researchers with ideal opportunities to probe planetary atmospheres.

During a transit, some of the starlight is eclipsed by the planet completely, causing overall dimming, and some is transmitted through the planet’s atmosphere. The atmosphere filters out some colors more than others depending on factors such as what it is made of, how thick it is, and whether or not there are clouds.

Because different gases absorb different combinations of colors, researchers can analyze small differences in brightness of the transmitted light across a spectrum of wavelengths to determine exactly what an atmosphere is made of.

In this case, the resulting spectrum scientists obtained was significant: The first clear, detailed, indisputable evidence for carbon dioxide ever detected in a planet outside the Solar System.

No observatory has ever measured such subtle differences in brightness of so many individual colors across the 3 to 5.5-micron range in an exoplanet transmission spectrum before. Access to this part of the spectrum is crucial for measuring abundances of gases like water and methane, as well as carbon dioxide, which are thought to exist in many different types of exoplanets.

Kirk says, “The remarkably strong signal is a testament to JWST's exquisite precision and revolutionary wavelength range, and demonstrates how much we stand to learn from this awesome observatory."