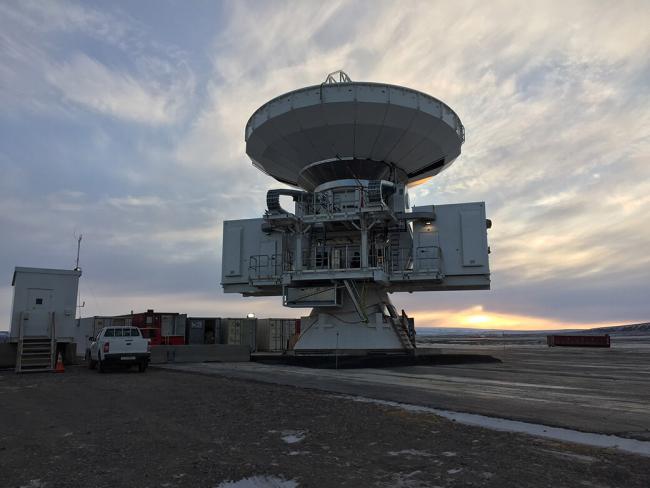 The Greenland Telescope is part of the expanded Event Horizon Telescope (EHT). Its current location is the Thule Air Base in northwestern Greenland; it will eventually be moved to a higher altitude site on the island.

Nearly every galaxy — including the Milky Way — harbors a supermassive black hole at its center. Even though these monsters are millions or billions of times the mass of the Sun, they are still tiny in size compared to their host galaxies, and are often obscured by interstellar materials. However, matter falling into the Milky Way’s black hole emits light of just the right wavelength to pierce that interstellar gas. That wavelength is suitable for observation using submillimeter observatories, which view in light at the boundary between infrared and radio wavelengths.

The Greenland Telescope is a submillimeter telescope 12 meters (39 feet) in diameter that was originally constructed as a prototype for the Atacama Large Millimeter/submillimeter Array (ALMA) in Chile. In 2018, it was relocated to Greenland to be part of the Event Horizon Telescope (EHT), the globe-spanning array of observatories designed to capture the first images of black holes. Prior to the Greenland Telescope’s addition to the array, the EHT imaged the supermassive black hole at the center of the giant galaxy M87, which is more than 6 billion times the mass of the Sun. With the addition of the Greenland Telescope, the EHT continues to monitor both M87 and the Milky Way’s supermassive black hole.

The Greenland Telescope also can operate as an individual telescope, where its capabilities allow it to observe interstellar clouds where stars form. The observatory is also used in tandem with the CfA’s Submillimeter Array (SMA) in Hawaii and ALMA in South America, to create high-resolution images through the method of very long baseline interferometry (VLBI).

Engineers rebuilt the Greenland Telescope to operate in Greenland’s conditions, which are much colder than those found in Chile. The telescope is located on the US Air Force’s Thule Air Base, which is 1,200 kilometers (750 miles) north of the Arctic Circle. In the future, the telescope will be relocated to a higher elevation on the Greenland ice sheet.

The location of the Greenland Telescope extends the coverage of the EHT from the South Pole to beyond the Arctic Circle. The extent of the virtual observatory means greater resolution and a clearer picture of the two black holes that are EHT’s targets. That in turn enables these telescopes to provide a better test for Einstein’s theory of general relativity than has been achieved for black holes in the past.