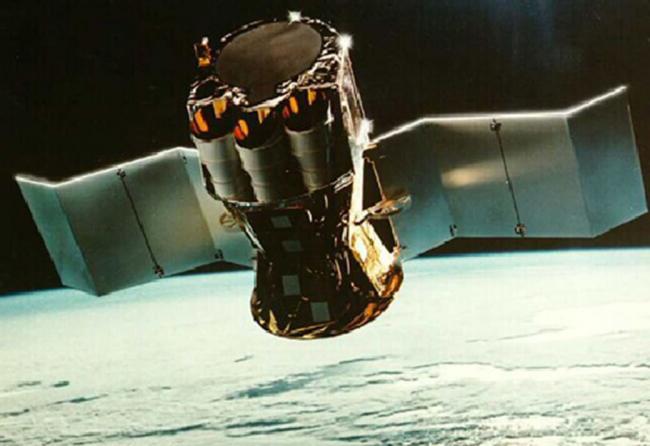 An artist's depiction of NASA's Submillimeter Wave Astronomy Satellite (SWAS), which operated from 1998 through 2005. The SWAS operations center was hosted by CfA, and the satellite's telescope was designed by CfA researchers.

The story of star and planet formation is part of our own story: how often do stars like the Sun and planets like Earth come to be? Astronomers learn that story by observing in submillimeter light, the range of wavelengths at the boundary between infrared and radio light. This part of the spectrum includes light emitted by the interstellar dust and gas that are the raw materials for newborn stars, allowing astronomers to trace its structure and composition.

SWAS was built to study the structure and composition of interstellar clouds, to understand the way star and planet formation begins. The available elements and molecules in these clouds are important for any planets that form, and provide the possible ingredients for life. SWAS collected data on the abundance of water and a variation with a different isotope of oxygen (H218O), molecular oxygen (O2), carbon, and carbon monoxide with a less common isotope of carbon (13CO). Astronomers used SWAS to observe more than 100 Milky Way molecular clouds, including “dark cores” where stars form.

The spacecraft was part of NASA’s Small Explorer Program (SMEX) of relatively inexpensive missions. SWAS launched in 1998 with an original mission duration of three years, but it worked well enough for NASA to extend the observation program into 2005. The observatory was designed to be a complete submillimeter observatory on a spacecraft, including a telescope and two receivers for collecting light, along with a spectrometer for separating the light into its component wavelengths.

CfA researchers designed the telescope and managed its operations from the ground. SWAS also provided vital support to NASA’s Deep Impact mission to the comet Tempel 1, providing data on the chemical composition of the comet before, during, and after the probe’s arrival.