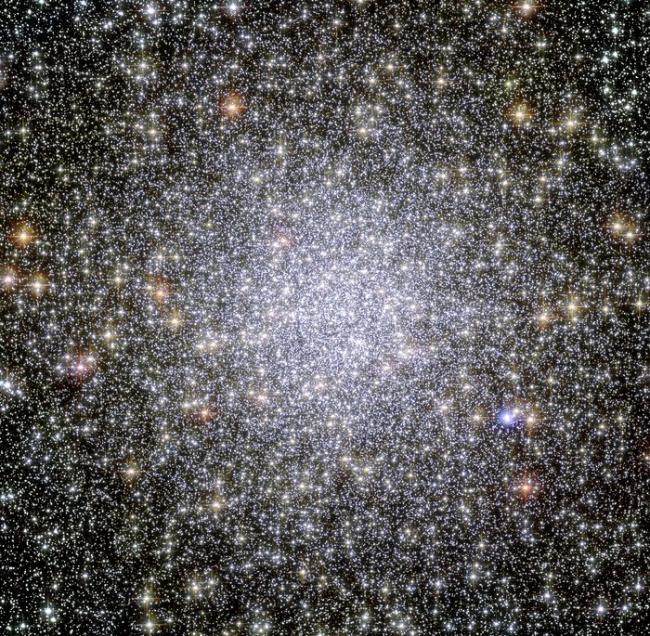 An optical image of the globular cluster 47 Tuc taken by Hubble. There are numerous known low-mass X-ray binary stars (LMXBs) in this and other globular clusters. Astronomers report finding what might be the the first LMXB whose compact object is a black hole rather than a neutron star.

A globular cluster is a roughly spherical ensemble of stars (as many as several million) that are gravitationally bound together, and typically located in the outer regions of galaxies. Low mass X-ray binary stars (LMXBs) are systems in which one star is compact (a neutron star or black hole) and is accreting matter from a companion star. Astronomers have long noticed that there are fractionally many more LMXBs in globular clusters than elsewhere in the galaxy, an overabundance that is usually attributed to the high stellar density in globular clusters. But this calls attention to another unusual feature of the LMXBs in globulars. In the galactic field, most LXMBs are formed from binary stars as they age and evolve, but in globular clusters it has been shown that most LMXBs form when compact objects encounter and then capture another star. There are many neutron stars in clusters, but black holes that form in these dense stellar environments are expected either to sink down to the center of the cluster or else to be gravitationally ejected from the cluster after they are formed. Indeed, all of the LMXBs seen in globular clusters are of the type with a neutron star.

CfA astronomer Javier Garcia was a member of a team studying LMXBs in the 47 Tuc globular cluster. They discovered one, called X9, that appears to contain a black hole, and if the interpretation is correct X9 would be the first such case in our Galaxy. The team used simultaneous observations of the source with Chandra, NuSTAR, and the Australia Compact Array, plus archival datasets, to find a twenty-eight minute modulation of the signal from X9, such as would be produced by a black hole of about one solar mass orbited by a white dwarf star of about 0.02 solar-masses. The source has some other unusual characteristics, including a precession period of 6.8 days, and a relatively high rate of mass transfer for LMXBs, about seven-millionths of an Earth-mass per year.