Challenging the Brightness Limits of Quasars 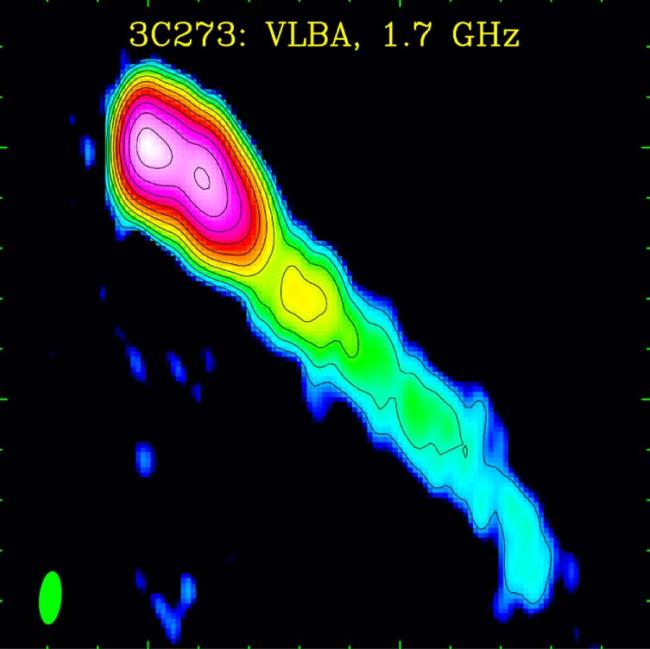 Ground-based radio observations of the quasar 3C 273, (the label explains that these are VLBA observations taken at a radio frequency of 1.7GHz), showing the powerful jet and bright core. New observations in concert with the ten meter RadioAstron Space Radio Telescope discovered that the bright core is even brighter than previously thought, by a factor of about one hundred, challenging current theories.

Quasars are galaxies with massive black holes at their cores from which vast amounts of energy are being radiated. So much light is emitted that the nucleus of a quasar is much brighter than the rest of the entire galaxy, and these tremendous luminosities allow quasars to be seen even when they are very far away. Much of the radiation is at radio wavelengths, and is produced by electrons in powerful jets ejected from the core at speeds very close to that of light. Such fast-moving charged particles can scatter photons of light, kicking them up in energy while losing a corresponding amount of their own energy. In extreme situations, as is found in quasars, the moving particles will scatter the photons they emit, with the result that the velocities they can attain are self-limited. Astronomers quantify these conditions with a brightness temperature, and conventional estimates conclude that the maximum such temperature is about a trillion (!) degrees.

Brightness is a quantity that depends on size: A small source that emits as much energy as a large source appears to be brighter. In an effort to constrain the size of the emitting region in quasars, the Russian Federal Space Agency launched the ten meter RadioAstron Space Radio Telescope in 2011 with a goal of conducting unprecedented, high spatial resolution radio "very long baseline interferometry" measurements when combined with ground-based radio dishes. The instrument was used to study the very luminous quasar 3C 273, located about two billion light-years away. Previous observations of 3C 273 suggested that its emission region was less than about a light-month in size (the distance light can travel in one month, one twelfth of a light-year), in part because the light varies on a timescale of months. The corresponding brightness temperature is close to the nominal limit.

CfA astronomers Michael Johnson and Ramesh Narayan, together with their RadioAstron teammates, measured the brightness temperature of 3C 273 and discovered that it appeared to exceed the so-called limit by nearly a factor of one hundred. The scientists considered a number of possible effects that might ameliorate the dramatic conclusion, for example, the angle at which we view the beam of fast-moving particles is not well known but enters into the calculation. Their conclusion is that the discrepancy appears to be real. In a series of two papers, the scientists describe the results and offer some possible explanations. One is that turbulent gas in our galaxy is distorting the light from the quasar, an effect that had not been seen until these higher resolution measurements. Another, more dramatic option, is that some unknown physical processes are at work in the vicinity of the supermassive black hole.