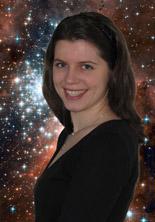 Dr. Anna Frebel of the Harvard-Smithsonian Center for Astrophysics has been awarded the 2010 Annie Jump Cannon prize of the American Astronomical Society for "outstanding research and promise for future research," an honor awarded annually to a woman postdoctoral astronomer.

Dr. Frebel joined the Optical and Infrared Astronomy Division of the CfA in January 2009 as a Clay Fellow; she is also affiliated with the CfA's Institute of Theory and Computation. Dr. Frebel's research interests broadly cover the early universe, and how metal-poor stars in our local universe can be used to obtain constraints on the first stars (which formed when the heavier elements had yet to be produced), the distribution of stellar masses formed, stellar nucleosynthesis in these objects, and, when they die as supernova, the products they leave behind.

Dr. Frebel is an active observational astronomer, and also works on theoretical projects in support of the observations. She is best known for her discoveries and subseqeunt spectroscopic analyses of the most metal-poor stars and how these stars can be employed to uncover information about the early universe. As a Clay fellow, Dr. Frebel has continued her research on old stars using the CfA's optical telescopes in Arizona and the Magellan telescopes in Chile, and has expanded her research to include observations of faint stars in the least luminous dwarf galaxies to unravel the early formation history of the Galaxy.

Before coming to the CfA, Dr Frebel obtained her PhD in 2006 at the Australian National University, and was a McDonald Research Fellow at the University of Texas at Austin. For her thesis, she was awarded the Charlene Heisler Prize of the Astronomical Society of Australia for the best Australian astronomy PhD thesis of 2006. In 2009, the German astronomical society award her the Ludwig-Biermann young astronomer award.

Dr. Frebel will deliver her invited talk at an upcoming AAS meeting.