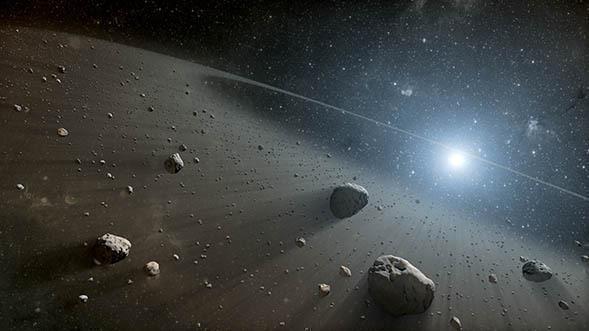 An artist's conception of a dust belt around a bright star. Evidence for such a ring of debris with a time-variable composition was found around a faint white dwarf star, leading scientists to propose that collisions and agglomerations between disk components can lead to the brightening and dimming of the starlight as observed.

Stellar variability has long offered insights into stars' physical properties. The star Mira (Omicron Ceti), for example, was so-named in 1596 by Dutch astronomers who were amazed by its miraculous brightening because of what we now know to be due to periodic changes in its size and temperature. Much less dramatic variability can also be caused when a star has a disk of dust that occasionally blocks some of its light as seen from the Earth. Smaller and fainter stars are typically out of reach for variability studies, but sometimes their disks (when they have them) can generate enough debris to affect detectable changes in the starlight. For astronomers interested in how planets formed from dust disks around stars of all types, these smaller systems have the potential to constrain the bigger picture of planet formation and evolution, especially if they signal some dramatic event or important evolutionary phase like the Late Heavy Bombardment phase of our solar system. Some changes in exoplanetary disks have already been spotted. Comets, for example, are known to be present in a handful of systems through variations in the stars' optical and ultraviolet spectra and via irregular stellar dimming.

A white dwarf star is the evolutionary end product of stars like our sun which, in another seven billion years or so, will no longer be able to sustain burning its nuclear fuel. With only about half of its mass then remaining, it will shrink to a fraction of its radius and become a white dwarf. White dwarf stars are common, the most famous one being the companion to the brightest star in the sky, Sirius. CfA astronomer Scott Kenyon was part of a team that has been studying the white dwarf star GD56 for 11.2 years, and has seen its light rise and fall by about 20% consistent with dust production or depletion from its disk. The team used the IRAC camera on Spitzer, the WISE mission, and ground-based observations from the UKIRT and Keck telescopes to characterize these fluctuations. They found that there was no change to the color of the light, implying that all the dust being destroyed or created was at about the same temperature, and hence was probably located at about the same distance from the star. The scientists hypothesize that gravitational attraction or collisional grinding between particles in the disk are responsible for the decreases or increases, respectively, in the disk’s dusty area and hence in the varying obscuration. These kinds of disk activities are known to be commonplace in disks around young stars, but were unexpected much older stars like this white dwarf. The authors conclude by noting that active processing of dust like that occurring here can result in material falling onto the star and being detected in enhanced element abundances in the stellar spectra.