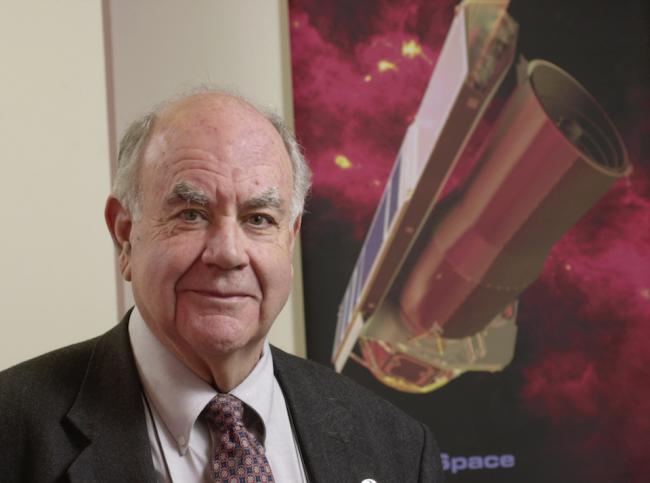 Giovanni Fazio has been awarded the 2019 SPIE George W. Goddard Award in Space and Airborne Optics "in recognition of his exceptional achievements in the area of infrared instruments spanning 40 years, including the Infrared Array Camera (IRAC) onboard the Spitzer Space Telescope..." Dr. Fazio is internationally recognized as an innovator and mentor in astrophysics.

Dr. Fazio received a B.S. degree in physics and a B.A. degree in chemistry from St. Mary's University, Texas, in 1954, and a Ph.D. in physics from the Massachusetts Institute of Technology in 1959. In that same year, at the University of Rochester, Dr. Fazio pioneered the development of gamma-ray astronomy using balloon-borne telescopes, and later was the co-principal investigator for the gamma-ray detector experiment on NASA's first Orbiting Solar Observatory. Dr. Fazio joined the Smithsonian Astrophysical Observatory and the Harvard College Observatory in 1962, where he initiated a program in gamma-ray astronomy using balloon-borne and ground-based detectors. He also initiated the construction of the 10-meter optical reflector at the F. L. Whipple Observatory in Arizona to search for ultra high-energy cosmic gamma-rays. In the early 1970s, he pioneered the development of large balloon-borne telescopes for far-infrared astronomical observations above the atmosphere, and for 20 years he was principal investigator for the 1-Meter Balloon-Borne Far-Infrared Telescope. Dr. Fazio was the principal investigator for the first infrared astronomical telescope to fly in space, on the Spacelab II flight of the Space Shuttle in 1980, and was a co-investigator on the Submillimeter Wave Astronomical Satellite, which was launched in 1998.

In 1984, Fazio was selected as principal investigator for the Infrared Array Camera (IRAC) on the Spitzer Space Telescope, a NASA "Great Observatory." Spitzer was launched in August, 2003, and the IRAC camera has been in regular operation since then. For the past ten years, since the onboard cryogens were depleted in May 2009, IRAC has been the only one of Spitzer’s instruments continuing to operate, making extraordinary discoveries from measuring the mass of the most distant galaxy (GN-z11 –its light has been traveling for 13.4 billion years!) to finding and characterizing seven Earth-sized planets around the star in the TRAPPIST-1 stellar system. IRAC has studied objects from the most massive in the universe (like the giant cluster IDCS J1426.5+3508) to the least massive ones, near-Earth asteroids. IRAC, a popular research tool for astronomers, has had an oversubscription rate in this decade of between 3 and 4.5 :1. In fiscal year 2018 Spitzer's budget was $11M, and during this year 115 proposals competed for 39,795 hours of observations with IRAC, although only 14,000 hours were available. NASA announced it will turn off Spitzer in February 2020 as a cost-savings measure.

Dr. Fazio's current research interests include galaxies in the early universe and the flaring activity seen around the supermassive black hole in our Milky Way's galactic center. He continues to be interested in the development of astronomical instrumentation, especially for infrared wavelengths, and is the editor of the Journal of Astronomical Instrumentation.

This SPIE award is the latest in a long string of recognitions for Dr. Fazio. He won the 2015 American Astronomical Society Henry Norris Russel Lectureship prize. In 1998, he received the Tsiolkovsky Medal from Russia's State Museum of the History of Cosmonautics. In 2005, he received the UNICO National Marconi Science Medal and the NASA Public Service Medal and in 2008, the Royal Society of London/COSPAR Massey Award (Gold Medal) for outstanding achievements in space science. In 2009 he was selected to receive the Secretary's Distinguished Research Lecture Award of the Smithsonian Institution. He has received six NASA Group Achievement Awards over his career.