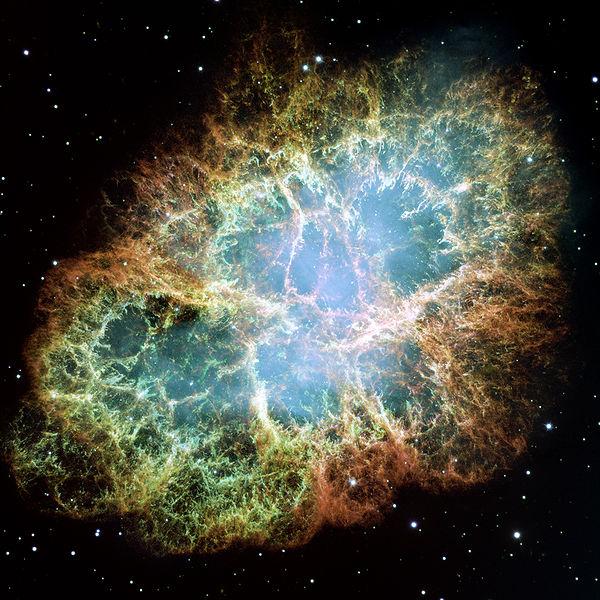 An image of the Crab Nebula taken by the Hubble Space Telescope. Observations of the Crab in gamma-rays find surprisingly bright emission.

The Crab Nebula is the remnant of a supernova. Its precursor star exploded in 1054 AD in an event that was recorded by Chinese and (quite probably) Anasazi Indian astronomers. It is called the Crab Nebula because it has many tentacle-like gas filaments extending outward nearly radially. At the center of the explosion is a pulsar, the spinning, super-dense stellar ash often left behind after a supernova explosion. Supernovae play a critical role in the cosmic ecosystem, because they seed space with the elements needed for life, including carbon, oxygen, and nitrogen. All of these elements are made in the precursor stars as a byproduct of nuclear burning; none were present in the early days of the universe.

Although supernovae have been seen since 1054, pulsars were only detected in 1968 thanks to advances in radio telescopes and the fact that pulsars have strong radio emission. Pulsars are rapidly spinning (the Crab pulsar spins about 30 times a second) and have strong magnetic fields. Charged particles in this environment are whipped around at nearly the speed of light, and as a result they shine at wavelengths from very low energy radio to very high energy gamma rays. Studying this light provides key information about the physical processes underway both in pulsars and supernovae. Surprises from these extreme conditions regularly turn up.

CfA astronomers Nicola Galante, Danny Gibbs, Emmet Thomas, Martin Schroedter, and Trevor Weekes, along with a large team of colleagues, used the VERITAS array of telescopes in Arizona to study the high energy gamma-rays from the Crab Nebula. They made two remarkable discoveries: first, they saw the gamma-rays pulsing, just as radiation at shorter wavelengths does. More significantly, they found that these gamma-rays were extremely intense - much brighter than expected from conventional models of pulsar emission. Writing in the latest issue of Science magazine, the scientists conclude that the gamma-rays cannot come from usual pulsar mechanisms like accelerating charged particles. Instead, they suggest the process whereby light is scattered by fast-moving electrons in the outer reaches of the pulsar environment. The new paper adds new insights to the nature of a pulsar's environment, and is a powerful reminder about the surprises nature still has in store.