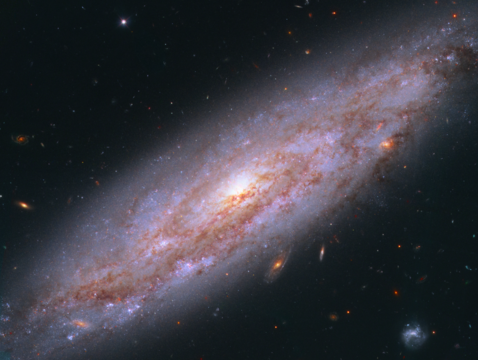 A Hubble image of the spiral disc galaxy NGC3972. Astronomers have developed a new model to explain why the star formation rate in nearly all disk galaxies, including the Milky Way, is so small, and why it correlates in the same way with a galaxy's gas mass and motions.

Disc galaxies like our own Milky Way, characterized by a flattened disc of stars and gas (often with a central bulge of material as well) have a wide range of masses, spatial extents, and stellar content. Nonetheless all disc galaxies, both locally and in the distant Universe, share some strikingly similar properties. Most notable is that the star formation rate correlates tightly with the galaxy’s gas content, the gas motions (the "velocity dispersion"), and the dynamical lifetime (roughly, the time it takes for the galaxy to rotate once). Moreover, this curiously universal rate is remarkably small: only about one per cent of the gas in disc galaxies turns into stars over that timescale, with much of the activity concentrated in the galaxies’ central regions. Most simple models of star formation predict that gravity should be much more effective in forming stars as it compresses the gas in molecular clouds. Observations indicate that both the correlations and the inefficiency extend down to the scale of individual molecular clouds.

CfA astronomers Blakesley Burkhart and John Forbes and two colleagues have developed a new unified model for galaxy discs that explains these phenomena, and some others besides. The scientists show that the correlation of star formation rate with gas motion is not caused by these motions but rather is the result of the transport of material within the galaxy, which affects both. The model maintains a state of gas equilibrium and marginal gravitational stability by including in a galaxy the radial transport of gas towards its nucleus and also the turbulent feedback from star formation. These two considerations are relatively straightforward in principle but produce a dramatic improvement in the agreement between observations and theory, for example by explaining how the eventual quenching of the star formation happens. The new work also provides a natural explanation for the cosmic epochs at which galaxies build up bulges and discs.

The Mass of the Milky Way