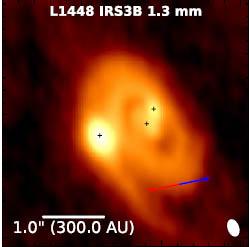 An ALMA millimeter-wavelength image of protostellar binary stars early in their formation. (The length scale and the size of the telescope's beam are shown at the bottom.) Astronomers have studied seventeen multiple systems and found evidence supporting the model of multiple stars developing from disk fragmentation.

Most stars with the mass of the sun or larger have one or more companion stars, but when and how these multiple stars form is one of the controversial central problems of astronomy. Gravity contracts the natal gas and dust in an interstellar cloud until clumps develop that are dense enough to coalesce into stars, but how are multiple stars fashioned? Because the shrinking cloud has a slight spin, a disk (possibly a preplanetary system) eventually forms. In one model of binary star formation, this disk fragments due to gravitational instabilities, producing a second star. The other model argues that turbulence in the contracting cloud itself fragments the clumps into multiple star systems. In the first case, simulations show that the two stars should be relatively close together, typically less than about 600 astronomical units (one AU is the average distance of the earth from the sun). If the second mechanism is correct, both close and wide binary pairs can form. A distinguishing feature of the turbulent fragmentation process, and one that facilitates an observational test, is that the seeds for multiplicity are produced early in the pre-stellar phases.

CfA astronomers Sarah Sadavoy and Mike Dunham were members of a team of astronomers that used the VLA and ALMA radio and millimeter-wave facilities to study seventeen protostellar systems of multiple-stars in the nearby Perseus cloud. The sensitive observations were able to reveal the environments of the systems and determine the presence of any small-scale rotation or surrounding material. Twelve of the systems were spatially resolved, and eight showed dust emission structures surrounding the pair. The slightly more evolved systems in the set showed no evidence for circumbinary dust; they have probably reached the end point of their early evolution and finished accreting material. In summary, about two-thirds of the systems were consistent with the disk fragmentation theory and one third was inconsistent with it. The results show that the disk fragmentation mechanism is an important one but probably not the whole story, and a larger sample should help constrain the processes even further.