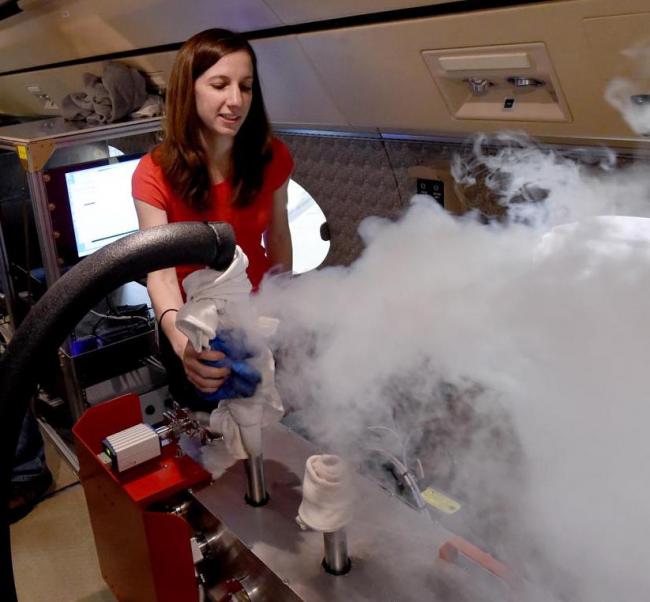 This image shows Jenna with AIR-Spec. She will be in the air six days from today observing the total solar eclipse over the south Pacific, with her collaborators Ed DeLuca and Pete Cheimets.

Dr. Jenna Samra of the Center for Astrophysics | Harvard & Smithsonian (CfA) and Harvard's School of Engineering and Applied Sciences has been awarded the International Astronomical Union's (IAU) Ph.D. Prize (from Division E: Sun and Heliosphere) for her thesis entitled, "An Airborne Infrared Spectrometer for Coronal Observations: Development, Characterization, and First Science Results from the 2017 Solar Eclipse." The prize celebrates the outstanding accomplishments made globally in astrophysics and is awarded annually in each of the IAU Divisions "in recognition of the most remarkable work done in the previous year." The Prize provides a travel grant to the IAU General Assembly in South Korea and an invitation to give a talk on her work.

Dr. Samra has BS & MS degrees in electrical engineering in 2006, 2008. She was in the CfA SAO Predoctoral Fellowship Program as a graduate student, a program that enables graduate students from other institutions to do a thesis project at CfA. She worked in the Lincoln Lab Sensor Technology and Systems Application Group on atmospheric spectroscopy from 2008-2012, and received her Ph.D. in Applied Physics from Harvard in 2018. She has been at the CfA since completing her Ph.D. degree.

Dr. Samra's specialty is the design, construction, and implementation of airborne instruments, and she was a key person in the design of the Airborne Infrared Spectrometer (AIR-Spec) eclipse instrument. The Air-Spec instrument was flown on an NSF Gulfstream V research plane during the 2017 total solar eclipse. It measured four infrared emission features in the solar corona in order to assess their suitability for future observations of the coronal magnetic field. Direct measurements of the coronal magnetic field have significant potential to enhance the understanding of coronal dynamics and improve space weather forecasting models. More specifically, these eclipse observations were designed to measure wavelengths and intensities in different regions of the corona of key excited atoms (Si X, S XI, Fe IX, Mg VIII, and Si IX), to determine any intensity gradients from the limb outward. It also was designed to study the radiative excitation of each line and to search for time-varying Doppler velocities, including signatures indicating possible waves or flows in the hot material. The campaign made the first observations of the highly excited infrared Fe IX line and identified radiative contributions as a function of radius. The observations are the subject of a recent paper in collaboration with Chad Madson (SAO) using the spectra from the Hinode EIS EUV mission to constrain the coronal density and further confirm atomic properties of the infrared lines.

Dr. Samra and the eclipse team plan to observe the upcoming 2019 solar eclipse with the same instrument; in addition to obtaining new information, the velocity measurements from the 2017 campaign need validation. Dr. Samra is also the instrument scientist for a privately funded project called "Methane Air" which identifies sources of methane leaks and is a prototype for a space based mission. The NSF ASPIRE MRI has the goal of providing a robust platform for IR instrumentation development ahead for the 2024 US total solar eclipse. Dr. Samra participated in the optical design for the Coronal Imaging Spectrograph in the EUV (COSIE) a NASA Mission of Opportunity proposal currently under consideration. Recently, her proposal to NSF entitled, "MRI: Development of an Airborne Stabilized Platform for InfraRed Experiments (ASPIRE)," was selected for funding.