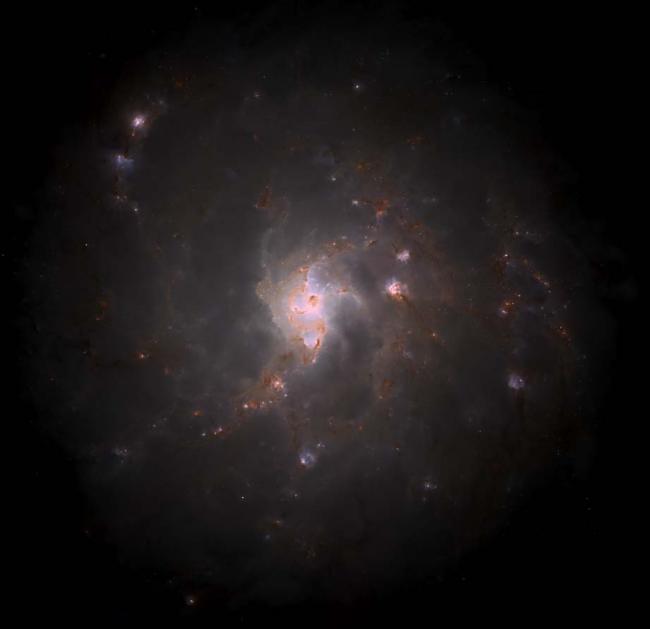 An image of a computer-simulated Milky Way-like galaxy.  Astronomers have added improvements to previous codes so that they now can more accurately include processes involving dust, molecular hydorgen, and feedback from radiation on star formation, marking a significant advance in galaxy evolution modeling.

Understanding the formation and evolution of galaxies is difficult because so many different physical processes besides just gravity are involved, including processes associated with star formation and stellar radiation, the cooling of the gas in the interstellar medium, feedback from accreting black holes, magnetic fields, cosmic rays, and more. Astronomers have used computer simulations of galaxy formation to help understand the interplay of these processes and address questions that cannot yet be answered through observations, like how the first galaxies in the universe formed. Simulations of galaxy formation require the self-consistent modeling of all these various mechanisms at once, but a key difficulty is that each of them operates at a different spatial scale making it nearly impossible to properly simulate them all at the same time. Gas inflow from the intergalactic medium into a galaxy, for example, takes place across millions of light-years, the winds of stars have influence over hundreds of light-years, while black hole feedback from its accretion disc occurs at scales of thousandths of a light-year.

CfA astronomers Rahul Kannan and Lars Hernquist, with their colleagues, have developed a novel computational framework that self-consistently includes all these effects.  The computations use a new stellar feedback framework called the Stars and Multiphase Gas in Galaxies (SMUGGLE) which integrates processes involving radiation, dust, molecular hydrogen gas (the dominant component of the interstellar medium) and also includes thermal and chemical modeling. The SMUGGLE feedback is incorporated into the popular AREPO hydrodynamic code that simulates the evolution of structures, and which has an added module to include radiation effects.

The astronomers use a simulation of the Milky Way to test their results, and report very good agreement with observations. They find that the feedback effects from radiation on star formation rates are quite modest, at least in a Milky Way example, where stars are forming at a rate of only two-to-three solar-masses per year. On the other hand, they find that the radiation from stars drastically changes the structure and heating of the interstellar medium by influencing the distribution of the hot, warm, and cold material which diverges from the simple expectation. The code does a good job of simulating the dust temperature distribution with warm dust lying (as expected) near the star-forming regions but with the cold dust, perhaps as low as ten kelvin, distributed farther away. The success of these new simulations motivates the authors to extend their work to simulations at even finer spatial resolution.