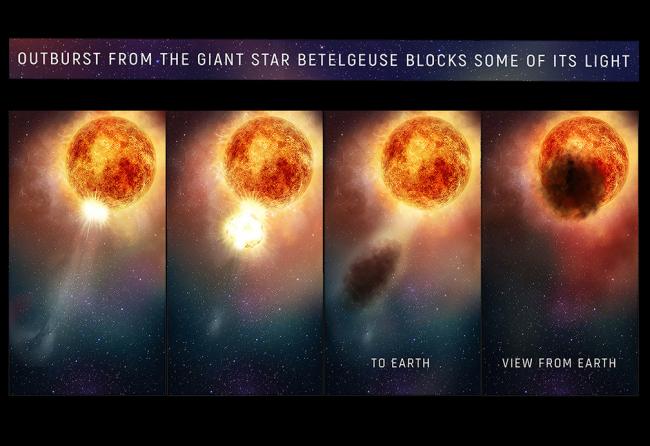 Recent observations of Betelgeuse have revealed that the star's unexpected and significant dimming periods in late 2019 and early 2020 were most likely caused by the ejection and cooling of dense hot gases, and that the star may be going through another dimming period more than a year early.

Between October and November 2019, Hubble Space Telescope observed dense, heated material moving outward through the star’s extended atmosphere at 200,000 miles per hour. The following month, several ground-based telescopes observed a decrease in brightness in Betelgeuse's southern hemisphere, as if something was blocking light in this region of the star. By February 2020, the star had lost more than two-thirds of its brilliance, a dimming visible even to the naked eye, creating buzz that the star might be going supernova. Continued ultraviolet light spectroscopic observations with Hubble provided a timeline for researchers to follow, like breadcrumbs leading back through time to pinpoint the source of the mysterious dimming.

"With Hubble, we had previously observed hot convection cells on the surface of Betelgeuse and in the fall of 2019 we discovered a large amount of dense hot gas moving outwards through Betelgeuse's extended atmosphere. We think this gas cooled down millions of miles outside the star to form the dust that blocked the southern part of the star imaged in January and February," said Andrea Dupree, associate director of the Center for Astrophysics | Harvard & Smithsonian, and lead author on the study. "The material was two to four times more luminous than the star's normal brightness. And then, about a month later the south part of Betelgeuse dimmed conspicuously as the star grew fainter. We think it possible that a dark cloud resulted from the outflow that Hubble detected. Only Hubble gives us this evidence that led up to the dimming."

And Betelgeuse held another surprise for scientists when Hubble observations revealed that the detected plasma was not ejected from the star's rotational poles as predicted by stellar models. "Hubble observations suggest that material can be driven off from any part of the stellar surface," said Dupree, adding that recent activity on Betelgeuse was not normal for this star. Dupree noted that Betelgeuse is losing mass at a rate 30 million times higher than the Sun, but that recent activity resulted in a loss of roughly two times the normal amount of material from the southern hemisphere alone. "All stars are losing material to the interstellar medium, and we don't know how this material is lost. Is it a smooth wind blowing all the time? Or does it come in fits and starts?  Perhaps with an event such as we discovered on Betelgeuse? We know that other hotter luminous stars lose material and it quickly turns to dust making the star appear much fainter. But in over a century-and-a-half, this has not happened to Betelgeuse. It's very unique."

Complementary observations using the STELLAr Activity Observatory—STELLA—measured changes in the velocity of the star surface as it rose and fell during the pulsation cycle, creating a rippling effect that may have propelled the outflowing plasma through the star's atmosphere. "We saw all the absorption lines in the spectrum blue shifted and knew that the star was expanding," said Klaus G. Strassmeier, director of cosmic magnetic fields at Leibniz-Institut fur Astrophysik Potsdam (AIP) and co-author on the study. "When the dimming started, the blue shift became smaller and smaller and actually reverted to a redshift when the star was faintest. So we knew the dimming must have been related in one or another way to the expansion and contraction of the star’s photosphere, but it alone could not have caused such great dimming."

As the star moved into the daytime sky and out of the view of Hubble and STELLA, researchers turned to NASA's Solar TErrestrial RElations Observatory—STEREO—to monitor the supergiant's brightness. But summertime observations revealed a startling surprise: more unexpected dimming. Between late June and early August 2020, STEREO observed Betelgeuse on five separate days, measuring the star's relative brightness in comparison to other stars. "Our observations of Betelgeuse with STEREO confirm that the star is dimming again. Betelgeuse typically goes through brightness cycles lasting around 420 days, and since the previous minimum happened in February 2020, this new dimming is over a year early," said Dupree, who plans to observe Betelgeuse with STEREO again next year, during the star’s maximum, to monitor for unexpected outbursts.

Intense interest surrounding Betelgeuse ignited late last year as the star continued to grow dimmer and dimmer, a behavior some scientists said signaled that the old star was about to go supernova. As a variable star that expands and contracts, dimming and brightening over each cycle, "Betelgeuse is a bright star in our galaxy, near the end of its life that is likely to become a supernova. When the star became very faint in February 2020, this was the faintest that it had ever been since measurements began over 150 years ago," said Dupree. "The dimming was obvious to everyone when looking at the constellation Orion; it was very weird, Betelgeuse was almost missing." At 725 light years away, light—and dimming—seen from Betelgeuse today on Earth left the star in the year 1300. "No one knows how a star behaves in the weeks before it explodes, and there were some ominous predictions that Betelgeuse was ready to become a supernova. Chances are, however, that it will not explode during our lifetime, but who knows?"

The full results of the Hubble and STELLA studies published today in The Astrophysical Journal. Observations from STEREO were reported via The Astronomer's Telegram on July 28, 2020.

The research was supported in part by STScI.