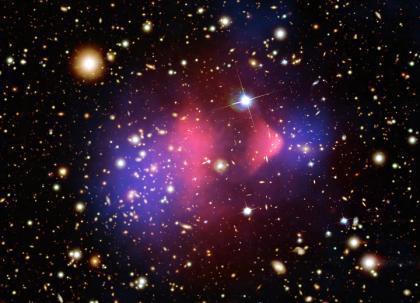 A composite image of a galaxy cluster formed from the collision of two large clusters of galaxies. Hot X-ray emitting gas is shown in pink and dark matter (inferred from its gravitational influence) is shown in blue. Astronomers have used archival Chanfra X-ray data to constrain the possibility that the mysterious dark matter in the universe is made of sterile neutrinos.

About eighty-five percent of the matter in the cosmos emits neither light nor any other known kind of radiation as far as is known, and hence is called dark matter. One of its other notable qualities is that it only interacts with other matter via gravity; it carries no electromagnetic charge, for example. Dark matter is also called "dark" because it is mysterious. It is not composed of atoms or their usual constituents (like electrons and protons) or of any other kind of known elementary particle.

Because dark matter is by far the dominant component of matter in the universe, its distribution and gravity have profoundly influenced the evolution of galactic structures as well as the distribution of the cosmic microwave background radiation. Indeed, the remarkable agreement between the values of key cosmic parameters (like the universe's rate of expansion) derived independently from two completely different cosmic structures, galaxies and the microwave background, lend credence to big bang models that require an important role for dark matter.

Physicists have tried to imagine new kinds of particles consistent with the known laws of the universe to explain dark matter, but so far none have been confirmed. One tantalizing possibility for a new particle is the so-called "sterile neutrino." There are currently three known types of neutrinos. All of them interact with matter via gravity and via the weak force (the weakest of the four forces of nature). All were originally thought to have no mass, like the photon, but about twenty years ago physicists discovered that they do have slight masses - about a million times less than an electron's mass but still enough to pose a fatal problem for physics' so-called Standard Model of particles. A possible solution would be the existence of a more massive neutrino, perhaps a thousand times bigger, dubbed the "sterile neutrino" because it would not interact via the weak force. It has never been detected.

Astronomers realized that if dark matter were composed of sterile neutrinos, then when these particles occasionally decayed they could emit a detectable X-ray photon. About seven years ago, X-ray astronomers reported finding a strange, faint X-ray spectral emission feature coming from clusters of galaxies where dark matter was prevalent. They suggested this feature could be the signature of the sterile neutrino. In subsequent years there have been many attempts to confirm the detection or to attribute it to instrumental or other non-astronomical effects, with only mixed successes. CfA astronomers Esra Bulbul and Francesca Civano and their colleagues have now completed an extensive archival study of Chandra X-Ray Observatory data, searching for this elusive feature. They did not find it, but their new analysis, consistent with other recently published limits, more heavily constrains the possible decay character of the putative sterile neutrino by as much as a factor of two under some assumptions, but cannot rule it out entirely.