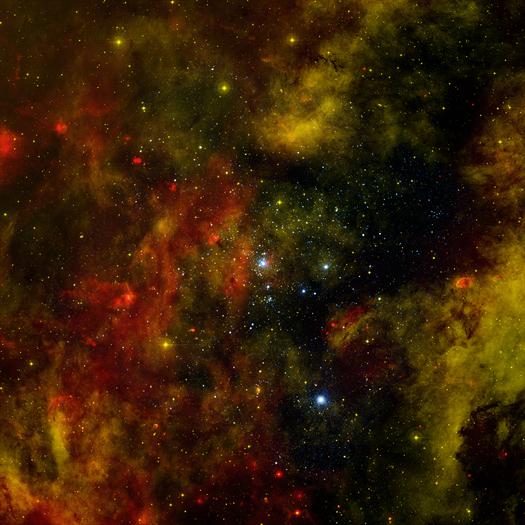 Massive young stars are known to emit strong X-rays. Unlike the X-ray emission from lower mass stars, however, which arises in stellar photospheres, the X-rays from massive stars are thought to result from powerful shocks. Several kinds of shocks can be responsible, produced either by very strong winds driven by the star’s radiation, by the head-on collision between winds that have been magnetically channeled by the star’s magnetic field, or by wind collisions in a binary stellar system in which each stars has a wind. Sorting out the mechanisms enables astronomers to identify the most active physical processes at work, and thereby decode additional information about the star’s physical makeup and evolutionary status.

CfA astronomers Nick Wright, Jeremy Drake, and Mario Guarcello and their colleagues used the Chandra X-ray Observatory to study the emission from 106 massive stars in the relatively nearby Cygnus-OB2 cluster. This relatively large sample enabled the scientist to test their models by examining, for example, whether or not there are clear correlations between a star’s X-ray strength and its luminosity.

The astronomers find for their massive stars that there is a well-defined correlation between the X-ray and total stellar luminosity, with the X-ray strength being about sixteen million times less; indeed, their relation is similar to one previously reported for another massive star-forming region, and favors the first (radiatively driven) kind of shocks. For the most massive stars in the sample, however, the team does find evidence for colliding shocks. The new results help to constrain models of X-ray emission from massive stars. Because the relations are about the same as in other massive star clusters but now extended to different clusters and cluster environments, the new work also shows that the mechanisms are not very sensitive to the local conditions.