The Two Micron All-Sky Survey (2MASS) was an ambitious project to map the entire sky in infrared light, providing a cosmic census of galaxies, star clusters, small Solar System bodies, and many more. 2MASS used two telescopes: the 1.3 Meter Telescope operated by the Center for Astrophysics | Harvard & Smithsonian, located at the Fred Lawrence Whipple Observatory (FLWO) in southern Arizona; and an identical instrument operated by the Cerro Tololo Inter-American Observatory in Chile. The survey was concluded in the late 1990s, making the telescope available to CfA astronomers and collaborators for new projects. The telescope was converted to automatic control, and renamed Peters Automated Infrared Imaging Telescope (PAIRITEL), for a program monitoring transient events such as supernovas and gamma-ray bursts. The PAIRITEL project ran from 2003 to 2012. Plans are underway in 2019 to reconfigure the telescope for visible-light measurements to hunt for exoplanets. 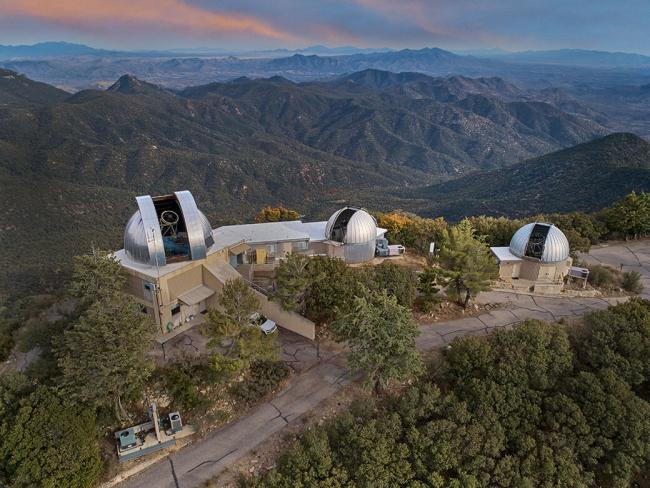 The three Ridge telescopes at the CfA's Fred Lawrence Whipple Observatory. The 1.3 Meter Telescope used for the 2MASS project is at the right; the 1.5-Meter Tillinghast and 1.2-Meter Telescopes are at left and center, respectively.

Astronomy works in two basic modes: targeting individual objects, and surveys cataloging whole patches of the sky. The 2MASS project was in the second category, working to create an infrared map of the entire sky. During the survey’s run from 1997 and 2001, 2MASS cataloged over 300 million astronomical objects, including a number of galaxies that are hidden in visible by the Milky Way.

To perform such a wide-scale survey, astronomers used two telescopes dedicated entirely for the purpose: the 1.3 Meter Telescope at FLWO for the northern sky, and its twin instrument located in Chile for the southern hemisphere. Both telescopes were equipped with mirrors 1.3 meters (4.3 feet) in diameter, and cameras capable of imaging the sky in three different wavelengths of infrared light.

2MASS was a joint project of the University of Massachusetts Amherst, the Infrared Processing and Analysis Center (IPAC) operated by NASA’s Jet Propulsion Laboratory (JPL) and Caltech, and the National Science Foundation (NSF). The 1.3 Meter Telescope at FLWO began 2MASS observations in June 1997, and finished on February 14, 2001. Subsequently, the telescope was given to CfA. In 2004 it was renamed the PAIRITEL 1.3 Meter Telescope, and was converted to automatic computer control for use in support of NASA’s Swift Gamma Ray Observatory.