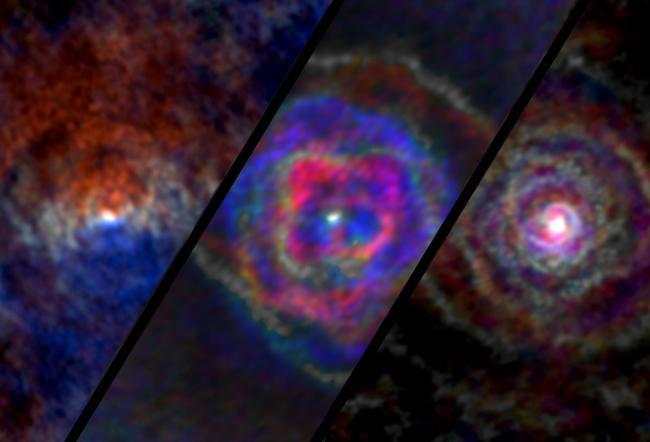 Cambridge, MA - Following extensive observations of stellar winds around cool evolved stars scientists have figured out how planetary nebulae get their mesmerizing shapes. The findings, published in Science, contradict common consensus, and show that not only are stellar winds aspherical, but they also share similarities with planetary nebulae.

An international team of astronomers focused their observations on stellar winds—particle flows—around cool red giant stars, also known as asymptotic giant branch (AGB) stars. "AGB stars are cool luminous evolved stars that are in the last stages of evolution just before turning into a planetary nebula," said Carl Gottlieb, an astronomer at the Center for Astrophysics | Harvard & Smithsonian, and a co-author on the paper. "Through their winds, AGB stars contribute about 85% of the gas and 35% of the dust from stellar sources to the Galactic Interstellar Medium and are the dominant suppliers of pristine building blocks of interstellar material from which planets are ultimately formed."

Despite being of major interest to astronomers, a large, detailed collection of observational data for the stellar winds surrounding AGB stars—each made using the exact same method—was lacking prior to the study, which resulted in a long-standing scientific misconception: that stellar winds have an overall spherical symmetry. "The lack of such detailed observational data caused us to initially assume that the stellar winds have an overall spherical geometry, much like the stars they surround," said Gottlieb. "Our new observational data shapes a much different story of individual stars, how they live, and how they die. We now have an unprecedented view of how stars like our Sun will evolve during the last stages of their evolution."

Observations with the Atacama Large Millimeter/submillimeter Array (ALMA) in Chile revealed something strange: the shape of the stellar winds didn't conform with scientific consensus. "We noticed these winds are anything but round," said Professor Leen Decin of KU Leuven University in Belgium, and the lead author on the paper. "Some of them are actually quite similar to planetary nebulae." The new findings may have a significant impact on calculations of galactic and stellar evolution, most pointedly for the evolution of Sun-like stars. "Our findings change a lot," said Decin. "Since the complexity of stellar winds was not accounted for in the past, any previous estimate of the mass-loss rate of old stars could be wrong by up to a factor of 10."

The observations revealed many different shapes, further connecting stellar wind formation to that of planetary nebulae. "The winds we observed exhibit various shapes that are similar to planetary nebulae,” said Gottlieb. "Some are disk-like, while others are shaped like eyes, spiral structures, and even arcs."

Astronomers quickly realized that the shapes weren’t formed randomly, and that companions—low-mass stars and heavy planets—in the vicinity of the AGB stars were influencing the shapes and patterns. "Just like a spoon that you stir in a cup of coffee with some milk can create a spiral pattern, the companion sucks material towards it as it revolves around the star and shapes the stellar wind,” said Decin. "All of our observations can be explained by the fact that the stars have a companion."

In addition, the study provides a strong foundation for understanding Sun-like stars and the future of the Sun itself. "In about five billion years, the Sun will become more luminous," said Gottlieb. "Its radius will expand to a length that is comparable to the current distance between the Sun and Earth, and it will enter the AGB phase." Decin added, "Jupiter or even Saturn—because they have such a big mass—are going to influence whether the Sun spends its last millennia at the heart of a spiral, a butterfly or any of the other entrancing shapes we see in planetary nebulae today. Our current simulations predict that Jupiter and Saturn will create a weak spiral structure in the wind of the Sun once it is an AGB star."