When a star like our Sun dies, it doesn’t explode into a supernova or collapse into a black hole. Instead, it gently sheds its outer layers, which form a beautiful cloud called a “planetary nebula”, while the dying star’s core becomes a white dwarf. Gravity and other influences shape the cloud into interesting patterns, and the complex chemicals inside the nebula glow in interesting colors when lit by the white dwarf. As a result, we often name planetary nebulas for the way they look to us: the Ring Nebula, the Dumbbell Nebula, the Stingray Nebula, and so forth.

The Beautiful Death of Sun-like Stars

Nuclear fusion is what makes a star a star: smashing atomic nuclei together deep in the star’s core. Eventually, though, every star will exhaust the ability to fuse nuclei into heavier elements. When that happens for a star less than about 8 times the mass of the Sun, it swells up to a huge size, large enough to engulf some of the planets orbiting it. Meanwhile, its core shrinks, and it no longer has enough gravity to hold onto the star’s outer layers.

The dying star then sheds those layers to make a planetary nebula. The new nebula contains chemicals that were present when the star formed, but also new ones: atoms formed via nuclear fusion, and molecules made in the dying star’s outer layers as they cooled and drifted into space. Many of those atoms are what astronomers call “metals”: elements heavier than helium on the periodic table. That’s one way dying stars change the chemistry of the galaxy, since new stars and planets can form from these atoms and molecules in a planetary nebula. Our Sun may also make a planetary nebula when it runs out of nuclear fuel in about 5 billion years.

The beauty of planetary nebulas is short-lived: they only linger a few thousand or tens of thousands of years before dispersing into interstellar space. That’s a long time in human terms, but it’s short in astronomical terms. Between that and their relatively small size, we only know of about 3,500 planetary nebulas in our galaxy.

However, the short lifespan means we can observe some planetary nebulas evolve, expand, and fade over a period of decades. That provides a detailed picture of how dying stars spread their atoms and molecules into the galaxy. The beautiful and complicated structure of planetary nebulas also reveals something about the interior of a dying star.

Despite the name, planetary nebulas don’t have anything to do with planets: when he first identified them in the 1700s, astronomer William Herschel thought their blue-green glow resembled the newly-discovered planet Uranus. 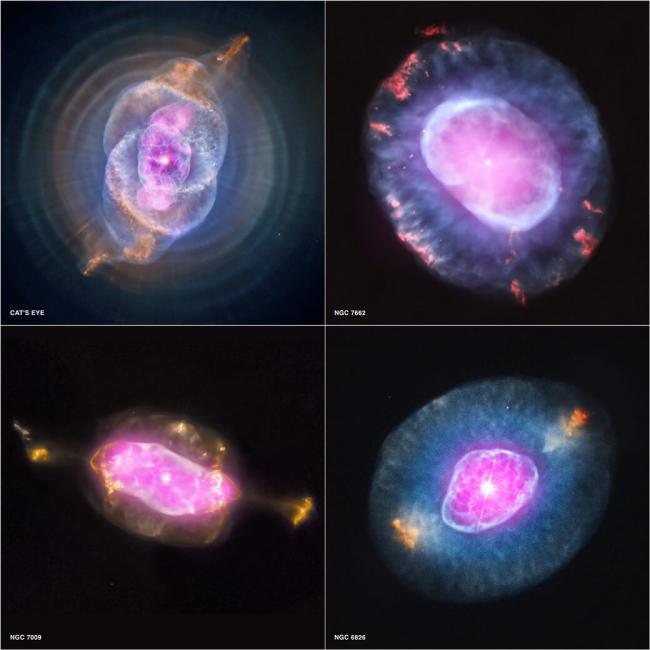