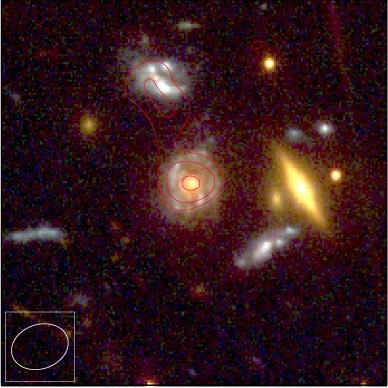 A Hubble Space Telescope image of distant, bright radio galaxies being gravitationally lensed by a very large foreground galaxy cluster. The red contours show the radio emission of these galaxies, which date from an epoch about three billion years after the big bang. A team of X-ray astronomers used these lensed radio galaxies to identify and study distant galaxies with active supermassive black hole nuclei.

A lensing cluster is a gravitationally bound collection of galaxies, hundreds or even thousands, whose mass acts as a gravitational lens to collect and reimage the light of more distant objects. These lensing clusters make excellent targets for astronomical research into the early universe because they magnify the faint radiation from more distant galaxies seen behind them, making these remote objects accessible to our telescopes. Most searches in "lensed galaxies" have so far been done at optical, near infrared or submillimeter wavelengths, and the latter have been successful at identifying luminous dusty galaxies from earlier cosmic epochs that are powered by bursts of star formation that were more common back then.

X-ray astronomers study the powerful jets and high energy particles around supermassive black holes at the nuclei of active galaxies (AGN). X-rays are also seen in galaxies dominated by star formation, but they are much dimmer than those seen from AGN and so are difficult to study when these galaxies are at cosmological distances. Even finding distant examples in lensing searches can be challenging, and when the star formation activity is modest they are not even expected to show up in infrared lensing searches. But in galactic nuclei, the same fast-moving particles that emit at X-ray wavelengths also emit at radio wavelengths. A search for lensed radio emission, therefore, is a way to study distant, faint galaxies and their black hole nuclei.

The astronomers used the Jansky Very Large Array to hunt for lensed radio sources in this cluster, and detected fifty-one compact galaxies -- seven whose light seems to be magnified by the cluster by more than factor of two and as much as a factor of nine. The scientists infer from the radio fluxes that most of these seven are forming new stars at a modest rate, ten to fifty per year, and date from an epoch about three billion years after the big bang. Two are also detected in X-rays by the Chandra X-ray Observatory, and so host AGN, each one radiating about as much light in X-rays as a billion Suns. The two AGN are interesting in themselves, but finding them both in this one region suggests that, like bright star forming galaxies, these AGN were more common back then too.