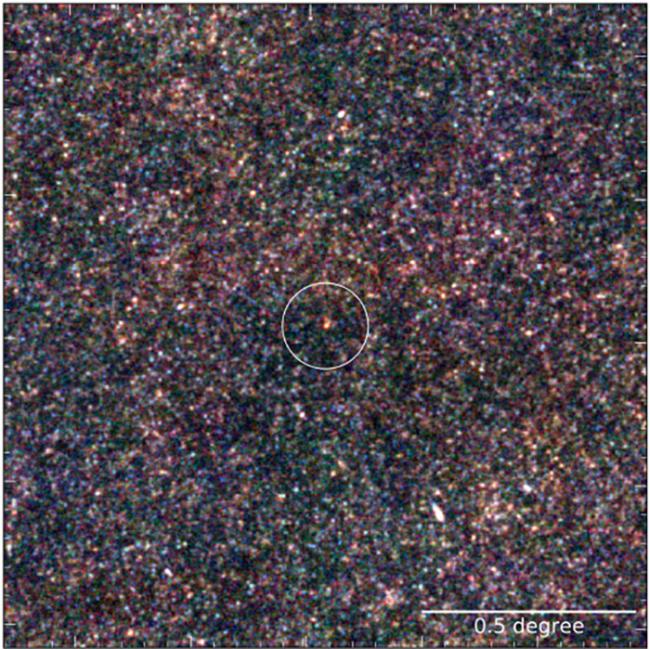 A false-color image of the far-infrared emission from a massive protocluster of galaxies (in the circle) dating from the epoch about 1.4 billion years after the big bang. Astronomers have completed deep optical and infrared observations of the complex and concluded that the star formation processes at work, although exceptionally active, generally seem to follow the same processes seen in our galaxy.

The structure of the universe is often described as being a cosmic web of filaments, nodes, and voids, with the nodes being clusters of galaxies, the largest gravitationally bound objects known. These nodes are thought to have been seeded by small-amplitude density fluctuations like those observed in the cosmic microwave background (CMB) which grew until they collapsed into the structures seen today. While the CMB is well understood, and the details of present-day galaxy clusters are well-described, the intermediate phases of evolution lack sufficient observations to constrain the models. Traditional galaxy cluster searches assume these objects have had enough time to equilibrate so that the intergalactic gas has heated up enough to be detected in X-ray emission. To detect the more distant galaxies and protoclusters that are too faint to detect in the X-ray, astronomers use their bright infrared or submillimeter emission instead.

The supercluster SPT2349 −56, discovered in the submillimeter band by the South Pole Telescope, is so distant that its light has been traveling for over twelve billion years. It hosts over thirty submillimeter-bright galaxies and dozens of other luminous and/or spectroscopically confirmed star-forming galaxies. It is one of the most active star forming complexes known, producing over ten thousand stars per year. One of its bright sources appears to be the merger of over twenty galaxies. The stellar mass of the system, however, was not known, making it impossible for example to know whether the huge burst of stars was the result of an extraordinary efficiency or simply arose because the system was so extremely large.

CfA astronomer Matthew Ashby was a member of a team that has now completed very deep observations at optical and infrared wavelengths to obtain the stellar masses through spectral energy distribution (SED) analyses. They used the Gemini and Hubble Space Telescopes to obtain optical/near infrared flux measurements and Spitzer's IRAC camera for the infrared flux. In order to model the SEDs, the many point sources detected need to be matched to one another at all wavelengths. This is a complex undertaking, and the scientists describe the processes for doing so while also addressing the serious blending that can occur due to inadequate spatial resolution in the infrared.

The astronomers find that the stellar mass in this primordial cluster as compared with its star formation rate is close to the value measured in nearby ("normal") galaxies, a conclusion that suggests that the star formation processes at work are similar to those in the local universe. The cluster does, however, show a deficit of molecular gas, suggesting that the activity is nearing the end of this tumultuous phase as the gaseous raw material for stars is being dissipated.