The new Smithsonian Astrophysical Observatory Advisory Board Prize honors Director Charles Alcock and his 17 years of service to the Center for Astrophysics. 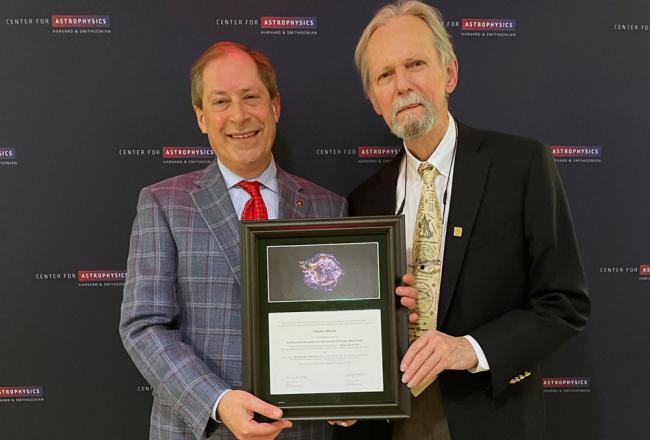 On Friday, Dec. 10, the Smithsonian Astrophysical Observatory (SAO) Advisory Board presented Charles Alcock with a surprise endowment established in his honor.

Alcock has served as the director of the Center for Astrophysics | Harvard & Smithsonian (CfA) for 17 years and will step down from the position on Jan. 1, 2022. Headquartered at Harvard, the CfA is a fusion of Harvard and Smithsonian scientists who are tackling humanity’s greatest questions about the universe.

"Working with Charles has been one of the highlights of my tenure on the board," says Michael Tuteur, chair of the SAO Advisory Board. "Charles is a brilliant scientist who goes about his work with remarkable grace, modesty and good humor. He has the qualities that I think we would all hope to find in a leader. It has been a privilege to work alongside him."

The board raised a total of $430,000. This includes a new endowment, named the SAO Advisory Board Prize (to be designated the Charles Alcock Prize in the future), which will support an annual research award for a predoctoral or postdoctoral SAO fellow. All 14 members of the SAO Advisory Board contributed to the fundraising campaign for the prize.

"The support of the entire board for this endowment is a testament to Charles' tenure as director,” says Sharon Allen, chief advancement and external affairs officer at the SAO. “We blew past our initial goal and it was heartwarming to witness the outpouring of support for Charles."

The prize will become available to prospective applicants in 2022.

The SAO Advisory Board also honored Alcock with a gift to the Giant Magellan Telescope (GMT). The $50,000 gift recognizes the Donald H. Menzel Professor of Astrophysics for the last decade of work he has contributed to establishing the GMT, a cutting-edge telescope that will search for life in the universe.

"Charles' keenest commitment before stepping down as director was to ensure that the GMT gets built and that our scientists have meaningful access to it," Tuteur explains. "The board recognizes that this separate gift we're making isn't by itself going to 'move the needle' materially in getting the telescope built, but we felt it was an important gesture in recognizing Charles’ significant contribution in raising funds for the GMT."

As director of the CfA, Alcock has overseen some 300 staff scientists within eight scientific divisions and departments and nine major scientific facilities and institutes, including the Fred Lawrence Whipple Observatory in Arizona; the Submillimeter Array in Hawaii; and the Chandra X-Ray Center in Massachusetts.

CfA researchers have striven to make leaps in humanity's understanding of the universe under Alcock’s tenure. Accomplishments include capturing the first image of a black hole in 2019; building and launching the Solar Probe Cup, a solar wind-measuring instrument currently onboard NASA's Parker Solar Probe; and booking TEMPO, an air pollution monitoring instrument, a forthcoming ride to space.

Raised in New Zealand, Alcock was a joint physics-math major at the University of Auckland. He then went on to earn a doctoral degree in astronomy from the California Institute of Technology.

Prior to joining the CfA in 2004, Alcock held multiple administrative and scientific positions at the Institute for Advanced Study in Princeton, N.J., the Massachusetts Institute of Technology, Lawrence Livermore National Laboratory and the University of Pennsylvania.

Alcock will remain a researcher at the CfA after stepping down, pursuing science related to the Taiwanese-American Occultation Survey.

Tuteur says, "Those of us on the board recognize that the director's job is a grueling one, and after 17 years, Charles deserves some time to relax a bit and return to his first loves: his family and astrophysics."

The CfA will host a celebration for Alcock, recognizing his contributions as director, in 2022.